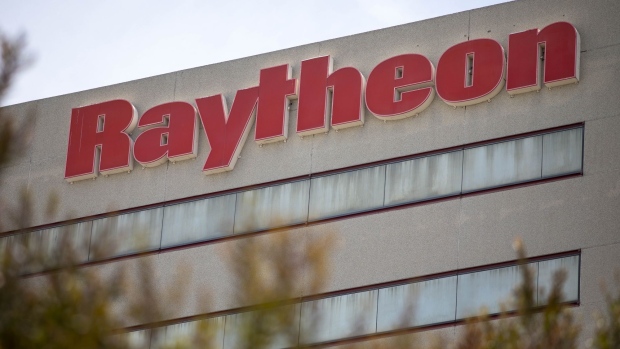 Signage is displayed outside a Raytheon Co. defense building in El Segundo, California, U.S., on Monday, June 10, 2019. United Technologies Corp. agreed to buy Raytheon in an all-stock deal, forming an aerospace and defense giant with $74 billion in sales in one of the industrys biggest transactions ever. Photographer: Kyle Grillot/Bloomberg , Bloomberg

(Bloomberg) -- Raytheon Technologies Corp. will require its roughly 130,000 employees in the U.S. to be fully vaccinated by Jan. 1, the company said Wednesday.

The aerospace and defense giant intends to require the shots as a condition of employment, with some exemptions for those with medical conditions or sincerely held religious beliefs. In a statement, Raytheon said the decision was made “to further protect employees and communities from the risks and uncertainty of Covid-19 and its variants.”

The decision makes the Waltham, Massachusetts-based maker of missiles, jet engines and commercial airliner gear one of the sector’s first big contractors to impose a vaccination requirement. It comes as the fast-spreading delta variant has fueled a surge in cases, prompting other big companies such as Delta Air Lines Inc., Microsoft Corp. and Facebook Inc. to require shots or face penalties.

Raytheon’s announcement comes about a week after President Joe Biden said the Department of Labor would develop a workplace safety rule requiring that companies with at least 100 employees either require vaccination or offer weekly testing.