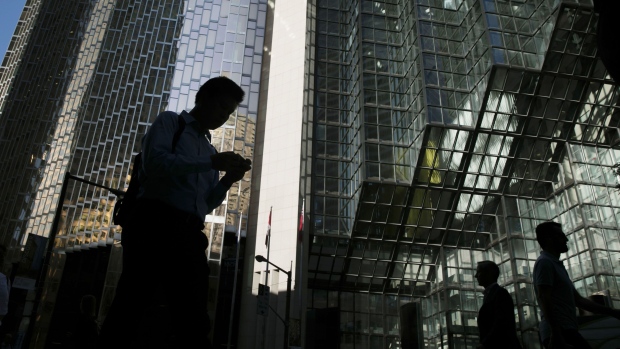 The silhouettes of pedestrians are seen walking past the Royal Bank of Canada (RBC) headquarters in Toronto, Ontario, Canada, on Wednesday, July 11, 2018. , Bloomberg

Royal Bank of Canada is telling its office workers in and around Toronto to keep working from home into next year as part of the company’s efforts to stem the spread of COVID-19, following similar instructions from Bank of Nova Scotia and Toronto-Dominion Bank.

“Our overall approach remains gradual and conservative,” Helena Gottschling, Royal Bank’s chief human resources officer, told Greater Toronto Area employees in a memo Thursday. “Although a very small number of GTA employees who are currently working from home may return to RBC premises starting in mid to late September, most will remain at home into 2021.”

Plans may vary across businesses and functions, Gottschling said, but the Toronto-based bank will be flexible wherever possible and focus on worker health and safety. Staffers returning to the office will be given at least four weeks’ notice, according to the memo. Royal Bank, Canada’s largest lender by assets, has about 82,500 employees.

Toronto-Dominion told employees in Canada and the U.S. Wednesday that it expects working from home to “remain the reality until the end of the calendar year, and possibly into 2021.” Scotiabank informed head-office employees in Toronto that they should plan to work from home for the rest of the year, though some are allowed to return earlier.