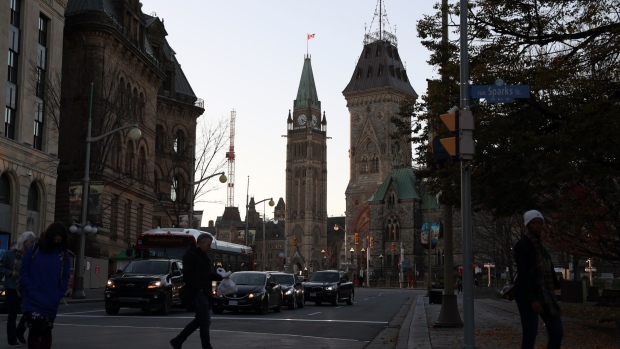 Centre Block and East Block of Parliament Hill in Ottawa, Ontario, Canada, on Tuesday, Nov. 1, 2022. Canada's economic growth rate fell by half in the third quarter, ahead of what's expected to be an even sharper downturn later this year. Photographer: David Kawai/Bloomberg , Bloomberg

(Bloomberg) -- Economists are split on whether the Bank of Canada will raise its overnight rate by 25 basis points or 50 basis points. Royal Bank of Canada rates strategist Jason Daw said the central bank may send a clear signal about the future by changing a single word.

In previous decisions, the bank has said its overnight lending rate “will need to rise further.” Daw will be looking at whether the bank alters that line in Wednesday’s release. “This time, they could possibly soften the language a bit by saying rates ‘may’ or ‘likely will’ need to rise further,” Daw said on RBC’s “Macro Minutes” podcast. “This could provide them with optionality for the January meeting.”

Daw, who is RBC’s head of North American rates strategy, said policymakers won’t explicitly say they’re about to pause rate hikes in the text, which comes out at 10 a.m. Ottawa time. “The last thing they want is a preemptive easing in financial conditions to occur.”

RBC’s base case is that the central bank will raise the overnight lending rate by 25 basis points to 4% in today’s decision and hold it there in 2023, Daw said.