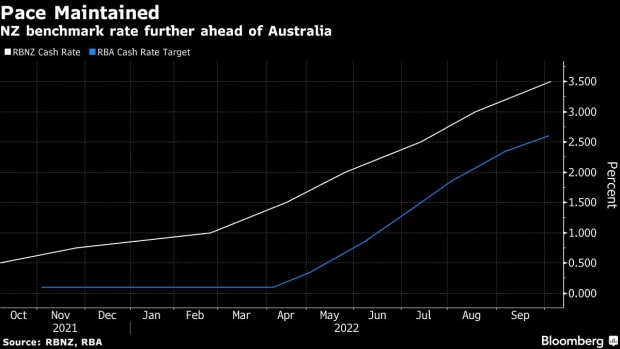 The currency and bond yields rose as the Reserve Bank increased its Official Cash rate to 3.5% on Wednesday in Wellington, as expected. The RBNZ is in the midst of its most aggressive tightening cycle since the OCR was introduced in 1999 to rein in spiraling consumer prices.

“The key messages in the statement suggest the RBNZ is on track to deliver another 50 basis points in November and remains firm in its stance,” said Nick Tuffley, chief economist at ASB Bank. He forecasts a 4.25% peak rate in early 2023, with risks “clearly skewed up.”

The currency jumped in response to the central bank’s hawkish tone, touching 58 US cents for the first time in 11 days before easing back. Bond and swap yields also climbed, while stocks pared gains.

New Zealand’s policy determination reflects its view that inflation is the No. 1 priority after it soared to a 32-year high in the second quarter. That contrasts with Australia which surprised markets Tuesday with a quarter-point increase as it tries to rein in consumer prices while also keeping its economy afloat.

“The Committee agreed it remains appropriate to continue to tighten monetary conditions at pace,” the RBNZ said in its post-meeting statement. “Core consumer price inflation is too high.”

The RBNZ has been at the forefront of global tightening, though the Federal Reserve has rapidly closed the gap with three 75-point moves  to take its benchmark federal funds rate target to 3-3.25%.

Those steps and projections of further tightening have boosted the greenback and weighed on other currencies including New Zealand’s.

“A lower New Zealand dollar, if sustained, poses further upside risk to inflation over the forecast horizon,” the RBNZ said.

The bank didn’t make any reference to its most recent projections in August, which showed the benchmark rate rising to an average 4.1% early next year. Some economists expect the OCR will need to keep rising in 2023, with ANZ Bank New Zealand predicting a peak of 4.75%.

After raising the OCR by 3.25 percentage points in 12 months, the RBNZ must now balance the risk of fresh inflation pressure from a weaker currency against the impact its hikes are already having on the property market and economic activity.

House prices suffered their second-biggest quarterly drop on record in the three months through September, while businesses remain downbeat on the economy and their own profitability.

“The RBNZ’s outlook has not fully adjusted to global growth risks and an easing in inflation pressures. We think the RBNZ will shift to smaller rate hikes over coming months as it approaches the end of its tightening cycle.”

Policymakers considered hiking the benchmark by 75 basis points before opting for 50, with some members arguing “that a larger increase in the OCR now would reduce the likelihood of a higher peak in the OCR being required,” the RBNZ said.

The bank “was unusually explicit” in revealing that debate, said Michael Gordon, acting New Zealand chief economist at Westpac Banking Corp. in Auckland who expects the OCR will rise to 4.5% by February.

“This suggests that the RBNZ is now eying a considerably higher peak than the 4.1% from its August projections.”