Renault SA will lose out on far more car production this year than previously anticipated because of the worsening global chip shortage, another obstacle to the carmaker’s turnaround plans.

The French manufacturer will make around 500,000 fewer vehicles -- that’s equivalent to nearly a fifth of last year’s output -- due to a lack of components, it said Friday. Renault previously predicted a gap of roughly 200,000 cars.

Despite the disruptions, the company stuck to its full-year margin target and sees positive automotive operational free cash flow on the back of better pricing and steering production to its most profitable models.

The shortage of semiconductors and other components needed to make new vehicles has hurt automakers across the globe, forcing factory shutdowns and delays of new models. Car sales in Europe are on course to fall even below the depressed levels in 2020, when pandemic restrictions choked deliveries.

“Renault faces another catastrophic financial year after the group was in the red in 2019 and 2020,” Nord/LB analyst Frank Schwope said in a note. The company is “in the middle of a restructuring and is threatened to be left behind.” 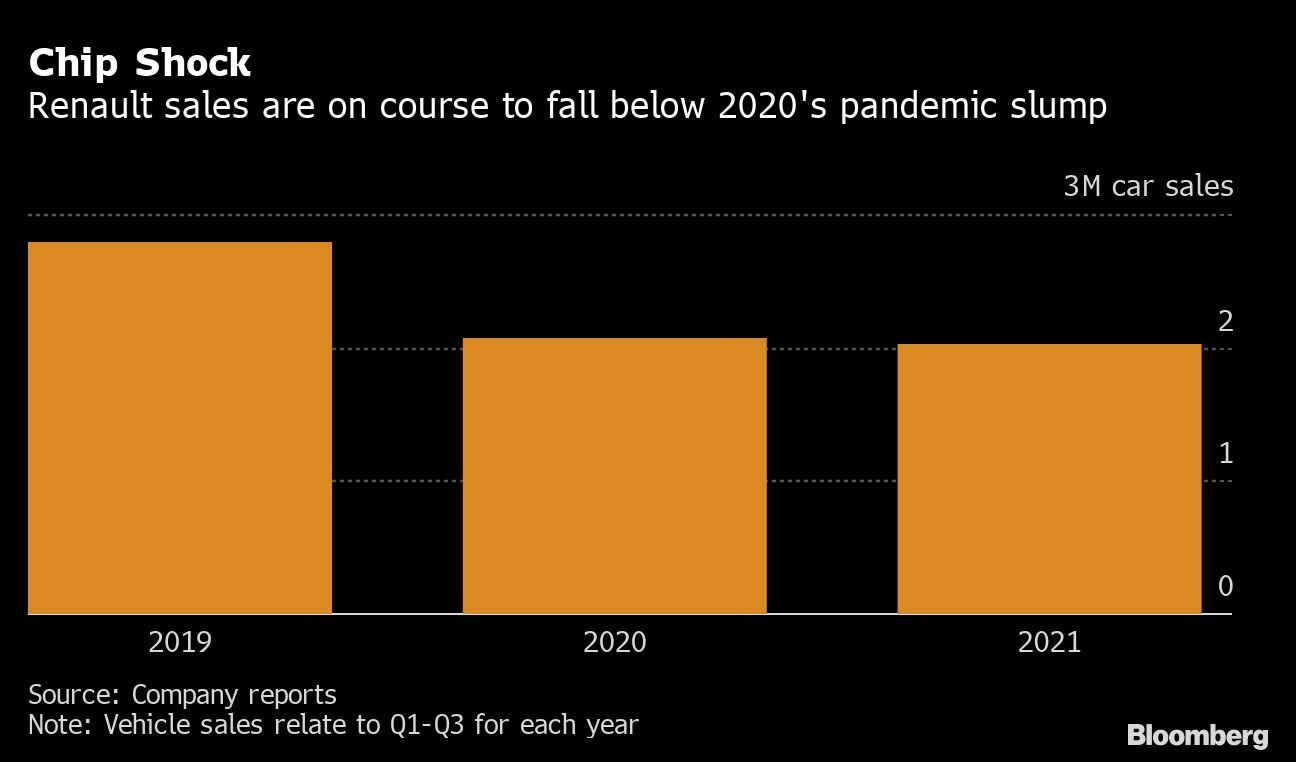 Renault Chief Executive Officer Luca de Meo expressed optimism in July that the chip crisis would ease in the second half. At the time, he declared that Renault is firmly on the comeback trail as it carries out its turnaround plan. Instead, the company lost output of around 170,000 vehicles in the third quarter and revenue slumped 13 per cent to 9 billion euros (US$10.5 billion). Renault on Friday warned of “reduced visibility” for the remainder of the year.

The availability of semiconductors “has been worse than anticipated,” deputy Chief Executive Officer Clotilde Delbos said during an analyst call. “The information we get from suppliers is, to say the least, very unreliable.”

Renault’s shares were almost flat as of 12:35 p.m. in Paris. The stock has dropped about 14 per cent this year.

The carmaker’s Batilly, Sandouville and Palencia factories have been closed all week and Maubeuge was stopped for three days. While the cost of raw materials is increasing, the company isn’t yet experiencing shortages of those components, Delbos said, adding that Renault is raising vehicle prices wherever possible.

Renault’s turnaround hinges on rejuvenating an aging lineup and raising efficiency across its production network. Delbos said new models like the Megane will be prioritized and launches planned for next year won’t be delayed. The company expects to meet its goal of cutting costs by 2 billion euros this year.

Sales of the electric Zoe dropped to around 47,000 in the year through September from more than 64,000 in 2020 as the aging model comes under pressure from rivals.