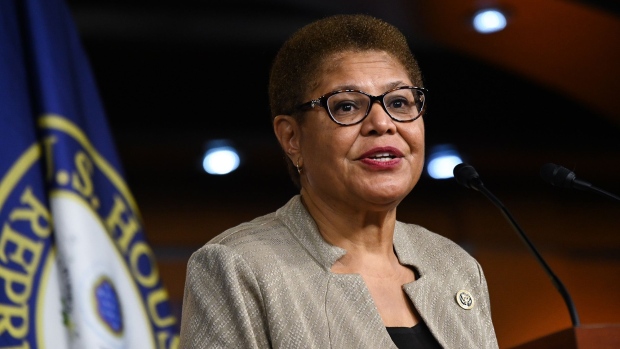 (Bloomberg) -- Representative Karen Bass is on Joe Biden’s short-list as a possible running mate, and two Trump surrogates for Florida hammered her on Saturday over her past support for Cuba, saying it would offend the state’s Hispanic voters.

A report on Friday said Bass had traveled to communist Cuba as part of a group as a high school student in the 1970s. Decades later, as a lawmaker representing California, she was part of former Secretary of State John Kerry’s 2015 trip to raise the American flag in Havana, and President Barack Obama’s visit to the island in 2016.

On a call Saturday facilitated by Trump’s campaign, Florida Senator Marco Rubio and Florida Lieutenant Governor Jeanette Nunez said those trips amount to Bass being a sympathizer to the Castro regime.

It was a taste of things to come should Biden opt for Bass, 66, as his running mate -- a decision expected from the former vice president in the second week of August. Polls show Biden with a lead over President Donald Trump in Florida.

Rubio and Nunez also suggested, without evidence, that Bass would ease the Trump administration’s efforts to oust Venezuelan President Nicolas Maduro. They tied Bass’s consideration by Biden to the Trump campaign’s broader messaging that the former vice president is kowtowing to the far left elements of his party.

Florida is a key swing state. Trump visited the state -- his adopted home -- on Friday for a roundtable with its elected leaders to discuss efforts against the coronavirus and preparedness for Hurricane Isaias, and to attend a fundraiser.

The state has a large Hispanic population, including many older Cuban immigrants thought to be hostile to U.S. outreach to Cuba.

Cuba remains “an evil Marxist regime” and Cubans “deserve freedom and democracy,” said Rubio, whose parents immigrated from Cuba in 1956.

Nunez said that a “vote for Biden-Bass would be a slap in the face to all of those Cuban dissidents and exiles,” who have advocated for democracy.

“With the news of Karen Bass on the short list for vice president, the harsh reality should be setting in for all freedom loving Americans,” said Nunez, adding that the Obama administration “cozied up” to Castro and to leftist Hugo Chavez, Maduro’s predecessor as Venezuelan president.