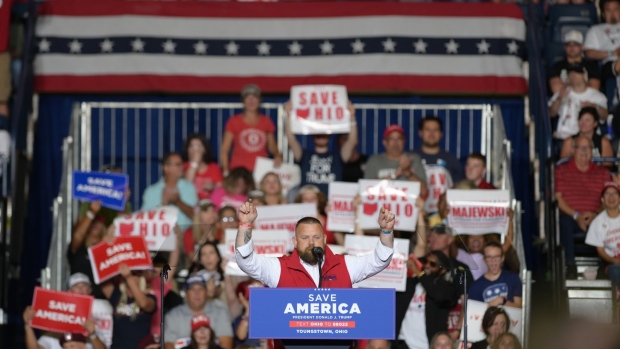 JR Majewski, US Republican Representative candidate for Ohio, arrives to speak during a rally in Youngstown, Ohio, US, on Saturday, Sept. 17, 2022. The 2022 election season kicked off with Republicans poised to take control of at least the House thanks to voter outrage over high prices. , Bloomberg

(Bloomberg) -- The House Republicans’ campaign apparatus spiked about $1 million in ads it booked in Ohio to support a House candidate who lied about his military service, essentially ceding a seat it had targeted to Democrats.

The National Republican Congressional Committee pulled the ads for J.R. Majewski, who was endorsed by former President Donald Trump in his race against Democratic incumbent Marcy Kaptur in Ohio’s 9th Congressional District, according to media-tracking firm AdImpact. Medium Buying also reported the cancellation.

The move comes after the Associated Press reported that Majewski lied about his military record. He claimed to have deployed to Afghanistan with the Air Force after the Sept. 11, 2001, terrorist attacks, but instead completed a six-month stint helping to load planes at an air base in Qatar.

Majewski attended Trump’s Jan. 6, 2021, rally at the Ellipse before heading to the Capitol, where he said he remained outside during the riot. Trump endorsed Majewski in the general election race. He invited Majewski to speak at his recent rallies after the first-time candidate painted a 20,000-foot “Trump 2020” sign on his lawn. Majewski defeated two Republican state lawmakers in the GOP primary in May.

Majewski had also claimed that the FBI was behind the attack at the Capitol and has previously expressed sympathy for believers of the QAnon conspiracy theory movement.

Spokesmen for Majewski and the NRCC didn’t immediately respond to messages seeking comment.

Kaptur, who is the fourth-longest serving member in the House, was facing her toughest contest in decades after Ohio’s GOP-controlled state legislature redrew her district to include more Republican voters. She aired an ad last month criticizing President Joe Biden, whose low approval ratings have been a drag on Democrats’ efforts to keep the House majority in the midterm elections.