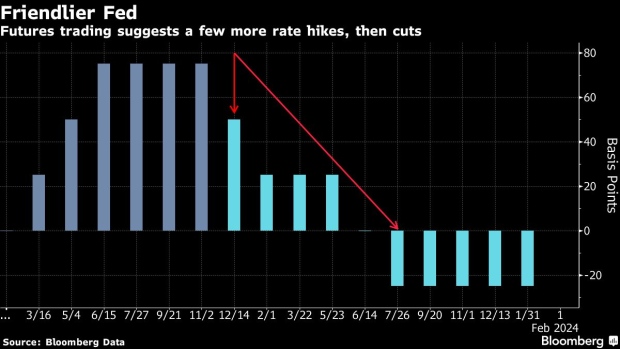 (Bloomberg) -- Under the surface of one of the quietest weeks on Wall Street all year, some money managers are renewing speculative bets, hoping against hope that a more friendly -- or at least less-hostile -- Fed, is back in their corner.

Sure, they’re getting ready to close out the worst year since the financial crisis. But a plucky optimism remains, and it’s showing up across a range of assets. A rush to corporate credit is favoring the riskier edges of the market, with junk bonds drawing their biggest passive inflows on record. Equity exposure among quants has turned positive and that of active fund managers is back near long-term averages. The inflation bid is crumbling, with the dollar heading for its steepest monthly decline since 2009 and benchmark Treasury yields down 30 basis points in November.

As trading volumes shriveled to some of the slowest all year and traders logged off for Thanksgiving, the volume of scary Fed speak also turned down a few notches. The latest policy minutes suggested that more moderate tightening would be appropriate, close on the heels of Federal Reserve Bank of Cleveland President Loretta Mester saying she doesn’t have a problem with the central bank slowing down the pace of rate increases soon.

Faith in the Fed pivot restored, investors ended the week on a high, with the S&P 500 on course for a second monthly advance. Even Europe’s beleaguered equity index has gained for six consecutive weeks. But as with previous rallies during the 2022 bear market, it may turn out market hopes jar with Fed reality.

And of course markets were bearishly positioned coming into the latest surge, which meant it triggered a larger-than-usual rush to cover shorts. Systematic traders alone gobbled up about $150 billion of stocks this month, and more this week, according to an estimate from Scott Rubner, a Goldman Sachs Group Inc. managing director.

Bets on a more moderate path of rate hikes were catalyzed this month by the cooling of October’s consumer price index. This week’s Richmond Fed Manufacturing Survey came in slightly below expectations and added to the peak inflation narrative.

Futures pricing indicates a downshift to a smaller, 50 basis-point, increase when policy makers gather on Dec. 13-14, in contrast to 75 basis-point hikes that had become norm, with the cycle ending next year with the key rate near 5%. Mester, at least, said she doesn’t think market expectations are “really off.”

“Sentiment from the more dovish Fed minutes is carrying over,” said Esty Dwek, chief investment officer at Flowbank SA. “Any indicators of softening growth are all playing into the softer inflation narrative, which is another support for the Fed arriving toward the end of its cycle relatively soon.”

Pivot hopes can be seen in the activity of dip buyers who reliably turned up to drive pandemic rallies and are back in force now, according to JPMorgan Chase & Co. strategist Nikolaos Panigirtzoglou.

High-yield corporate bonds have had their best two months of inflows on record, attracting $13.6 billion of exchange-traded funds inflows in October and November, according to data compiled by Bloomberg. Exchange-traded funds that track growth stocks are taking in the most cash versus funds that buy value stocks that have been among the winners of high inflation.

For stocks, the overall increase in risk exposure can be seen in a poll by the National Association of Active Investment Managers (NAAIM), where big-money allocators have boosted equity holdings close to their long term average.

Yet previous bouts of optimism proved short-lived, their collapse hastened by an assumption that rallying markets are themselves a threat to the Fed’s goal of subduing inflation. Financial conditions are close to levels that in June and September that prompted policymakers to push back.

“The market moves far quicker than the Fed will,” said Kumar at Seven Investment. “Every time the market fails to believe them, it eases financial conditions, making the Fed’s bias toward higher rates more embedded.”

The gains, coming amid one of the calmest period for markets this year, may be illusory. In the first three trading days of this week 28.2 billion shares changed hands on American exchanges -- the second lowest three-day volume this year. At the same time, Wall Street’s fear gauge, the Cboe Volatility Index, fell to its lowest level in more than three months.

Stock funds recorded a $4 billion outflow after last week’s $24 billion inflow, according to EPFR Global data. And some big money managers remain sidelined as stagflation fears mount. The dreaded scenario is the Fed fails both in its mission to extinguish price growth and engineer a soft landing.

Even so, the move back into risk is a stunning turnaround from September, when a record percentage of global fund managers surveyed by Bank of America had underweight equity allocations.

“What we are basically seeing is the least-loved assets outperforming,” said James Athey, investment director at Edinburgh-based abrdn. “Fed-fueled dip buying doesn’t easily go away after a year of Fed tightening.”