Risk-taking traders roared back to life Tuesday, abetted by speculators who had loaded up on too much protection against further losses.

Rallies in the most speculative corners of the market led U.S. stocks to the biggest surge since March, with all major averages climbing at least 2 per cent. That was enough for the S&P 500 to wipe out all of the drop suffered after Federal Reserve Chair Jerome Powell’s hawkish tilt a week ago.

Chalk it up to a market that had fallen too far too quickly, where frenzied selling eventually gives way to a bounce whose size defies logical explanations. Mechanical forces came into play, particularly in the volatility market, where the Cboe Volatility Index had the second-biggest drop since March 2020 after spiking to levels not seen in months, forcing an unwind in hedging positions that helped spur further stock gains. 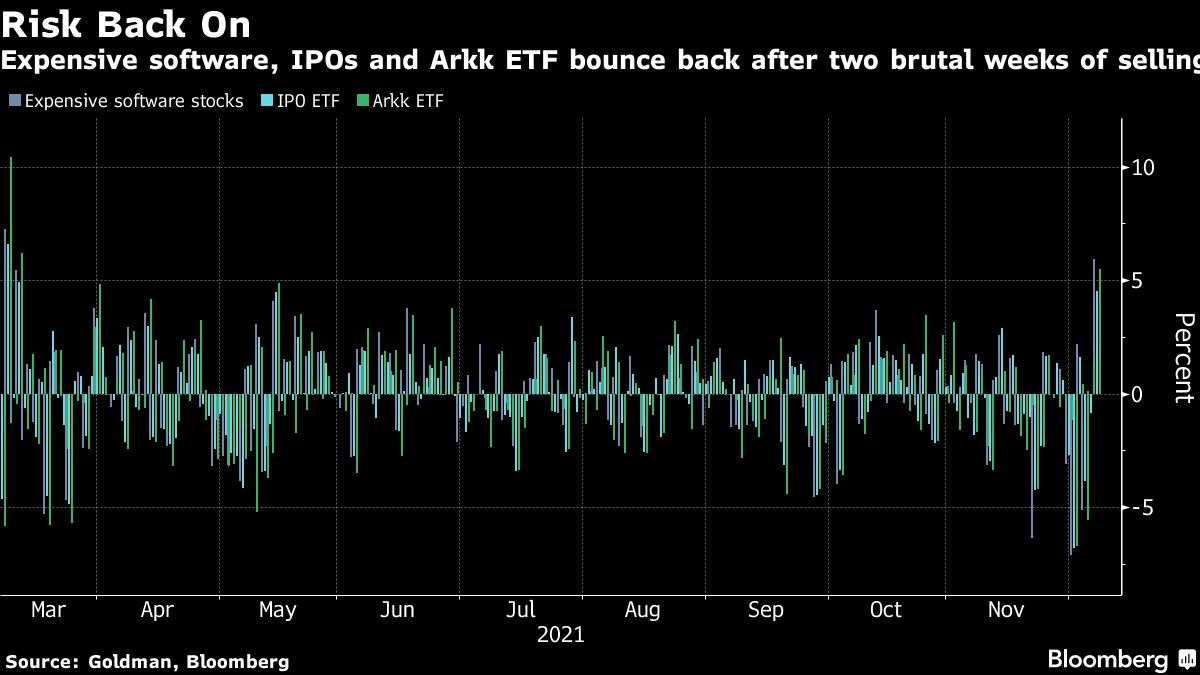 That’s not to say there weren’t fundamental reasons for the rebound. New data show the omicron variant of COVID may not be as bad as many had feared, the Chinese government looked set to boost its economy and newly hawkish Fed officials have gone silent ahead of their next meeting. Together, it was enough to drive bulls back into their riskiest positions, from newly minted shares to software makers that have yet to earn money.

“Clearly, risk appetite is rebounding as investors seem to be feeling less concerned about omicron,” said Dan Suzuki, deputy chief investment officer at Richard Bernstein Advisors. “My guess is that this is part of the normal buy-the-dip mentality you see as the believers see their favored names go on sale.”

Technology shares that had led the latest carnage paced the rebound. Shares of nosebleed software and internet companies surged almost 6 per cent Tuesday, rebounding from a slide that erased 10 per cent in last week alone, indexes tracked by Goldman Sachs Group Inc. show. Shares in recent IPOs also mounted a comeback, jumping more than 4 per cent after posting their worst month since the pandemic bear market in 2020. The ARK Innovation ETF (ARKK), the poster-child of the frenzy over hyper-growth names, climbed 5.4 per cent.

To Zhiwei Ren, portfolio manager at Penn Mutual Asset Management, the rally may have been driven by hedge funds, whose concentrated bets over expensive tech stocks backfired in recent weeks and were forced to unwind their positions. Now, with the market bouncing back, they’re under pressure to at least reverse some of their bearish wagers.

“Hedge funds shorted the market aggressively last week, and now they are scrambling to cover the short,” Ren said.

On Monday, Goldman’s hedge-fund clients were net buyers of equities for the first time in four days, driven by short covering, data compiled by the bank’s prime broker show. They cut equity exposure at the fastest rate since April 2020 in the previous two weeks.

Some of Tuesday’s outsize move was attributable to mechanics in the volatility market. Traders had piled into put contracts on the S&P 500 during last week’s turmoil, forcing dealers to short index futures as a hedge. That helped exacerbate a spike in the VIX last week. As traders grew more comfortable that the Fed and omicron won’t derail economic growth, they closed the puts, prompting dealers to buy index futures in droves, adding to gains in the market Tuesday. 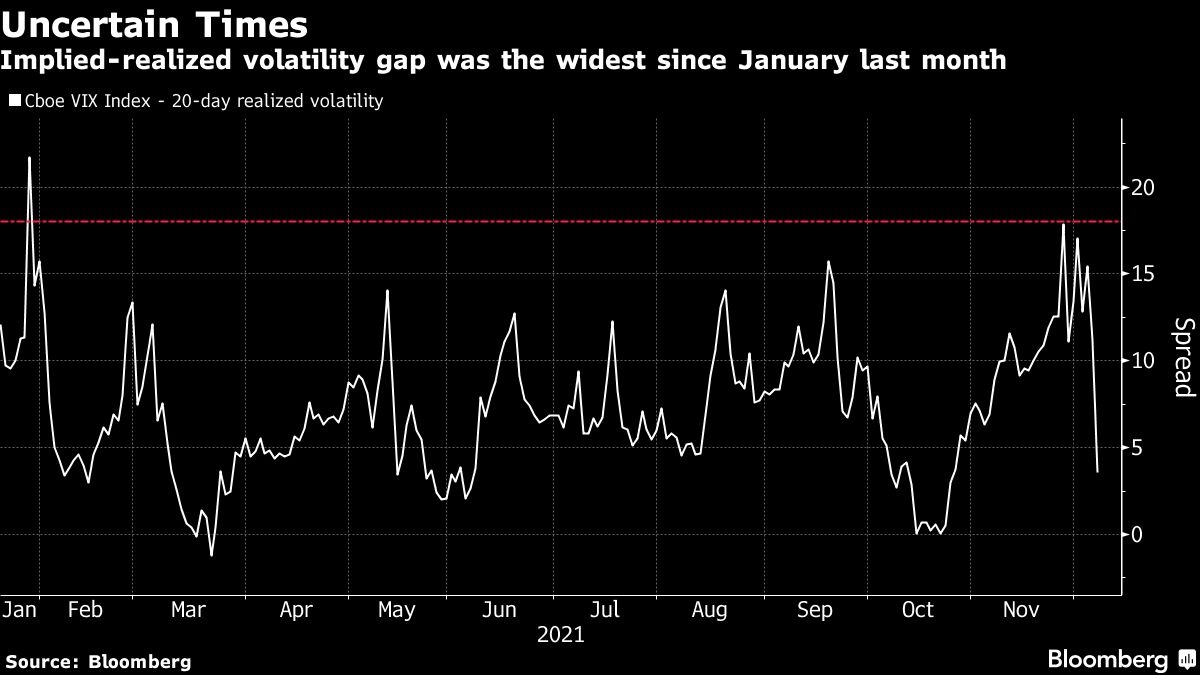 Another force may also have been at play. Last week, the VIX sat a 15-point premium to realized volatility over the prior 20 days. The unusually wide gap -- it’s in the 98th percentile of observations going back five years -- spurred bets that the VIX was due to pull back sharply, in turn forcing dealers on the other side of the trade to buy shares to stay market neutral, according to Brent Kochuba, founder of analytic service SpotGamma.

For investors who have been whipsawed by two-day volatility as the S&P 500 has moved at least 1 per cent in either direction in seven of the past eight sessions, the question is, whether the bottom is in for the market.

Doug Ramsey, Leuthold Group’s chief investment officer, tracks the rate of growth in money supply, as shown in the government’s M2 account, and the performance of speculative assets from newly minted shares to Bitcoin and ARKK. He found that all of their velocity peaked in February. 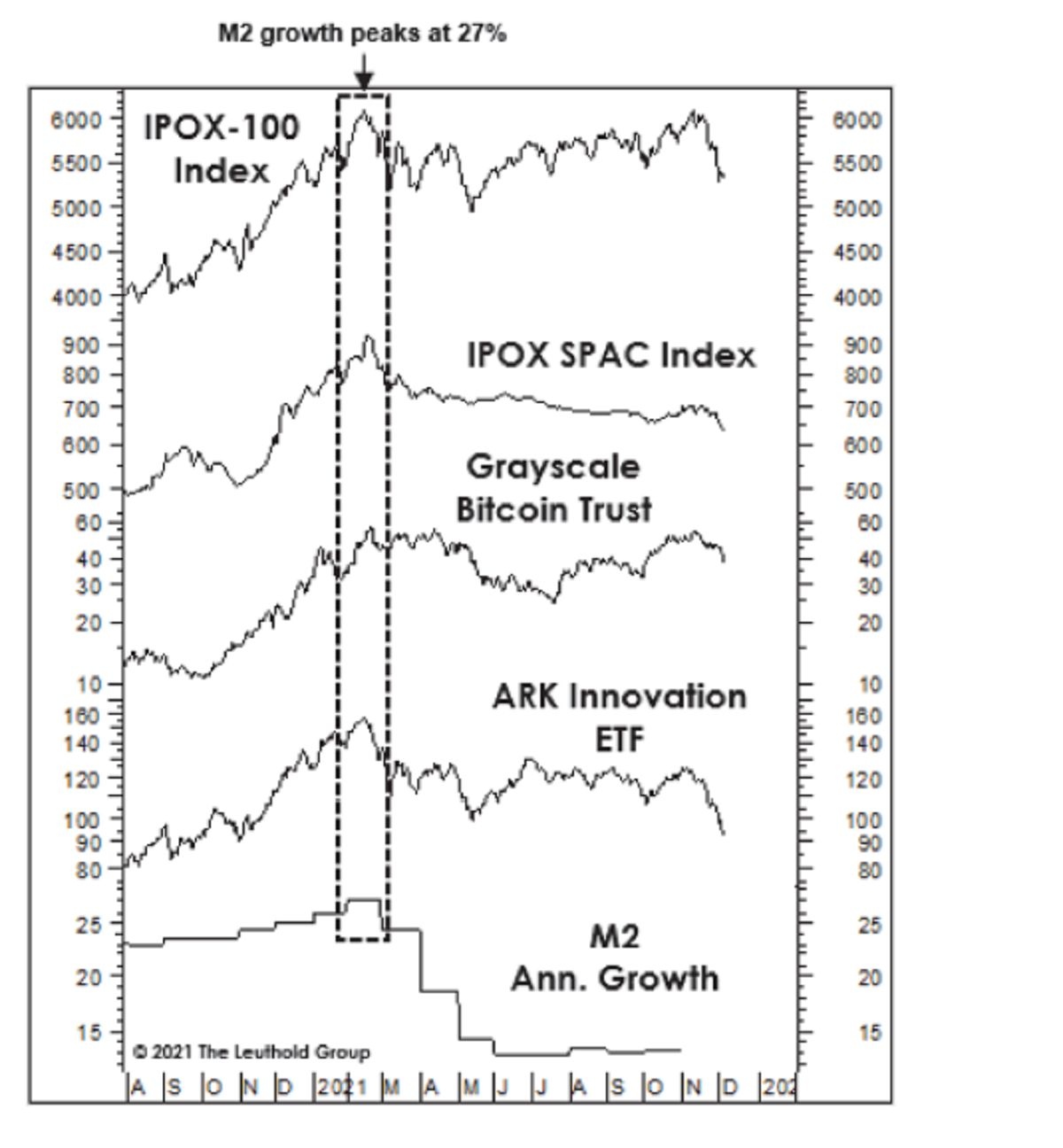 A coincidence? Perhaps. But to the extent that the Fed is tilting toward tighter monetary policy, the market has likely passed what Ramsey calls “peak insanity.”

In the options market, a buying frenzy of calls to profit from quick share gains has given way to a rush for puts to protect against losses. At the worst point of the selloff, almost one-third of members in the Nasdaq Composite were down 50 per cent from their recent peaks. And despite Tuesday’s rally, IPOs and ARKK are down more than 20 per cent from their February highs.

“Market internals reached oversold levels that were surprisingly deep for an ongoing bull market,” Ramsey wrote in a note. “And the ‘hiss’ from air escaping those pie-in-the-sky themes became audible. Both developments set the stage for a ‘Santa Claus’ rally while simultaneously serving as warning cracks for 2022.”