Robinhood Markets Inc. is seeking a valuation of US$35 billion in its initial public offering, just short of the highest analyst projections, as the free trading app advances toward a debut likely to draw in buyers from its own novice investor base.

The company at the center of this year’s meme stock frenzy will market 55 million shares for US$38 to US$42 each, according to a filing Monday with the U.S. Securities and Exchange Commission. Bloomberg Intelligence in March estimated that Robinhood could be valued in a range of US$13 billion to US$40 billion.

Robinhood aims to raise more than US$2 billion in its public debut. With the price range set, it will now proceed with its IPO roadshow. The company’s plans include a live-streamed event on Saturday, opening to the public a type of pre-IPO presentation that’s typically reserved for institutional investors. Its valuation could still change depending on demand for its shares.

The company is expected to start trading on the Nasdaq Stock Market on July 29, according to people with knowledge of the matter. A representative for Robinhood declined to comment.

As a publicly traded brokerage, Robinhood will join the ranks of Coinbase Global Inc., a cryptocurrency trading platform that debuted this year and is currently worth almost US$47 billion, and industry heavyweight Charles Schwab Corp., which bought competitor TD Ameritrade last year and has a market value of about US$130 billion.

With plans to raise more than US$2.2 billion, Robinhood’s IPO would be the fifth-biggest on a U.S. exchange in 2021. This year has already set an all-time record with 648 companies raising a total of about US$218 billion, according to data compiled by Bloomberg.

Robinhood’s co-founders, Chief Executive Officer Vlad Tenev and Chief Creative Officer Baiju Bhatt, own stakes in the company worth about US$2.5 billion and US$2.8 billion, respectively, at the midpoint price, according to the Bloomberg Billionaires Index. Tenev, 34, will hold about 26 per cent of the company’s voting power, while Bhatt, 36, will command 39 per cent, according to the filing.

Salesforce Ventures, the investment arm of Salesforce.com Inc., expressed interest in purchasing up to US$150 million of Robinhood shares at the IPO price, the filing showed.

Robinhood caught on during the coronavirus pandemic as homebound young people turned to online trading to pass the time and make money. Its monthly active users have more than doubled in the past year, with 17.7 million as of the first quarter, up from 8.6 million in the same period in 2020.

The Menlo Park, California-based company has said it will reserve 20 per cent to 35 per cent of its Class A shares for its customers. 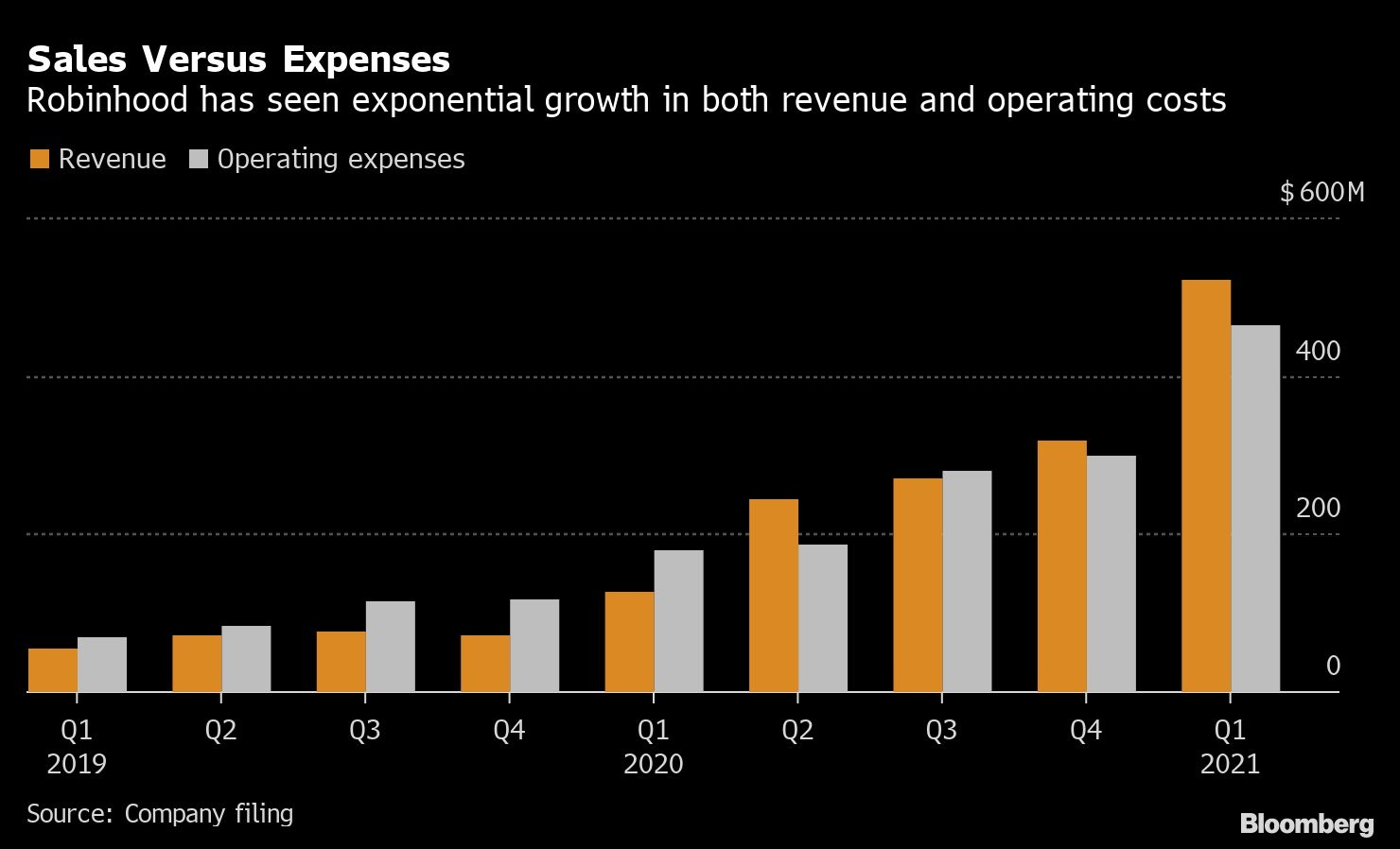 Robinhood’s increased popularity has led to scrutiny from politicians and regulators, who are focused on the so-called gamification of trading and its role in the meme-stock phenomenon. At the height of the volatile late January frenzy over stocks like GameStop Corp., the company had to raise billions of dollars from its backers.

In June, the Financial Industry Regulatory Authority imposed a nearly US$70 million fine on Robinhood, a record for the watchdog. Finra alleged Robinhood misled its customers about margin trading and lapsed in its oversight of technology and approvals for options traders. Robinhood neither admitted nor denied the claims.

Robinhood announced in March that it had filed confidentially to go public. It disclosed its financials for the first time in its July 1 public filing, which showed the company generated net income of US$7.45 million on net revenue of US$959 million in 2020, compared with a loss of US$107 million on US$278 million the previous year.

Robinhood’s top shareholders are venture firms DST Global, Index Ventures, New Enterprise Associates and Ribbit Capital. Each group owns more than 5 per cent of its stock leading into the offering.

Goldman Sachs Group Inc. and JPMorgan Chase & Co. are leading Robinhood’s offering. Its shares are expected to trade under the symbol HOOD.