Rogers Communications Inc. said Canada’s antitrust agency is opposed to its $20 billion takeover of rival Shaw Communications Inc., casting significant doubt on whether the companies will be able to close one of the country’s biggest-ever deals.

The companies extended the deadline for the merger to July 31, from June 13, and said they remain committed to it. But the Canadian Competition Bureau’s attempt to stop the deal raises the prospect of a monthslong legal battle.

Rogers wants to settle the matter out of court and has opened the door to selling assets to Montreal-based communications firm Quebecor Inc. to try to solve the antitrust concerns, according to a person familiar with the matter.

Rogers, Canada’s no. 1 wireless and cable provider, agreed to buy Shaw for $40.50 a share last year in the company’s biggest takeover to date. The wireless business is the key sticking point for regulators: Shaw’s Freedom Mobile unit is the fourth-largest wireless provider, with a presence in several major markets including Toronto and Vancouver.

Rogers already has more than 11 million wireless customers -- about 30 per cent of Canada’s population. The company hired Barclays to run an auction for Freedom Mobile in the belief that selling it would solve the antitrust problem.

In addition to Quebecor, Rogers has held talks about Freedom with Canadian internet provider Xplornet Communications Inc. and its controlling shareholder, New York-based Stonepeak Partners LP, according to a person familiar with the matter.

But a statement from Rogers and Shaw early Saturday morning suggests the Competition Bureau isn’t satisfied with their proposals so far. Amy Butcher, a spokesperson for the bureau, declined to comment on the case. “We will release more information regarding our investigation in due course,” she said.

“The fact that the bureau is stepping up I think is both the right thing and I think sends a message -- not just for this transaction but more broadly -- there is a willingness to step up and challenge mergers,” said Michael Geist, a University of Ottawa law professor who specializes in tech and telecom law.

The bureau got “burned” when it allowed BCE Inc. to acquire Manitoba Telecom Services Inc. in 2017, he said in an interview. BCE divested assets to Xplornet but the buyer failed to become a major competitor in wireless in the Western Canadian province, he said, and implications of the Rogers-Shaw tie-up are even bigger.

The agency may want Rogers to divest to a more well-established company like Quebecor, Geist said. It’s a significant competitor in Quebec and has 1.6 million wireless subscribers, compared with 2.2 million for Shaw.

A spokesperson for Quebecor couldn’t be immediately reached for comment.

The bureau’s action against Rogers “is a move informed by its past experience with the Bell-MTS deal, and more broadly with its knowledge of Xplornet and what it takes to create a viable fourth competitor here in Canada,” Dwayne Winseck, a professor at Carleton University, said by phone. 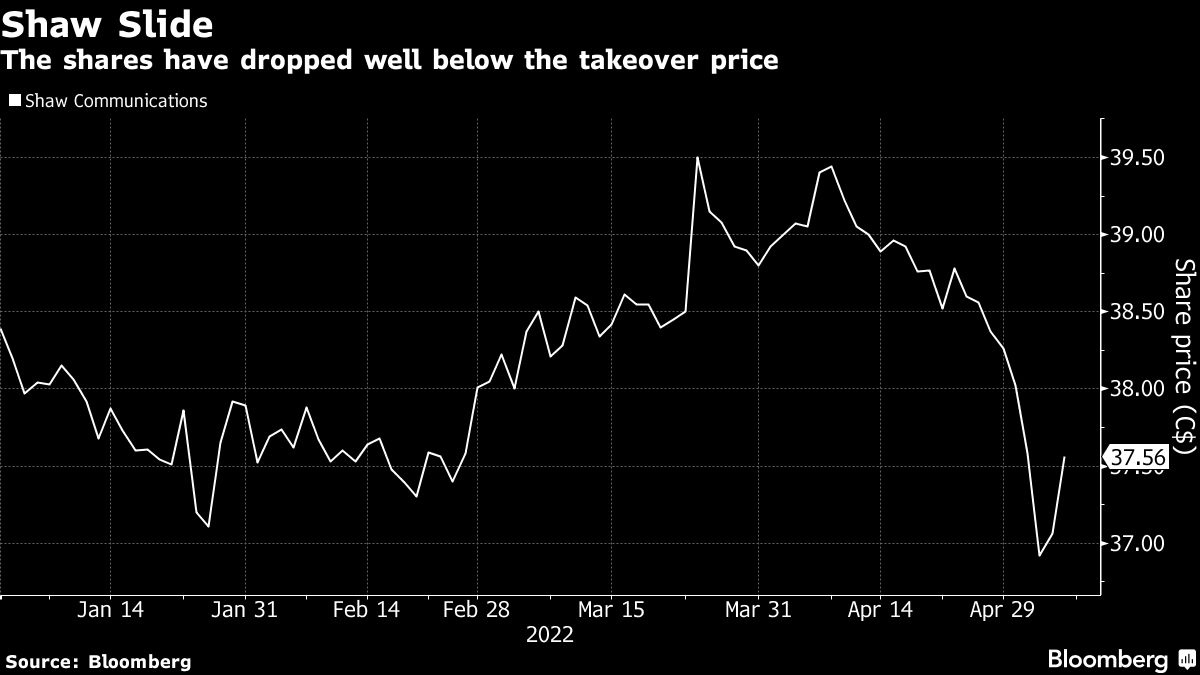 If the matter isn’t settled, the bureau will have to argue its case before Canada’s Competition Tribunal, which is similar to a court and deals with mergers and other matters that affect competition.

Rogers and Shaw said in the statement they’ll oppose the bureau’s attempts to stop the deal while still trying to negotiate a resolution, the companies said. They will also continue to seek approval from the Ministry of Innovation, Science and Economic Development.

“We could be headed to lengthy litigation,” Geist said.

Rogers shares have fallen about 7 per cent in the past month and Shaw has dropped almost 4 per cent amid a lack of information about the regulatory-approval process and a broad selloff in equity markets.

Without the deal, Shaw shares are worth close to $30, Morningstar analyst Matthew Dolgin said. They closed at $37.56 on Friday. “A big selloff in response to news the deal won’t happen would be warranted in our view. Shaw’s business has struggled, and we’d prefer the businesses of its major peers,” Dolgin said.