Rogers teams with Altice USA on $10.3B offer to buy Cogeco

After years biding its time, Rogers Communications Inc. is hoping Altice USA Inc.’s US$7.8 billion (C$10.3 billion) hostile bid for Cogeco Inc. will help it land the long-coveted, family-controlled telecom prize -- but it’s not going to be easy.

Investors have long speculated that Rogers might be interested in buying up Montreal-based Cogeco. The Toronto-based telecom giant has held a minority position in much-smaller Cogeco for decades, instigated by the late founder Ted Rogers. If his intention was to work toward a takeover, those plans have been thwarted by the founding Audet family, whose holding company controls the voting shares and hasn’t wanted to sell.

A bid by Altice USA to buy Cogeco, and then sell the Canadian assets to Rogers, could offer a way to break the impasse. For $4.9 billion, Rogers would gain instant scale to Cogeco’s highly profitable broadband business, according to Bloomberg Intelligence analyst John Butler, while Altice would gain U.S. customers.

“The real rationale for the deal is acquiring over 800,000 broadband subscribers because of all communications businesses, broadband is one of the most profitable,” Butler said. That revenue will help Rogers offset rising programming costs on the paid television side of its business, he added. 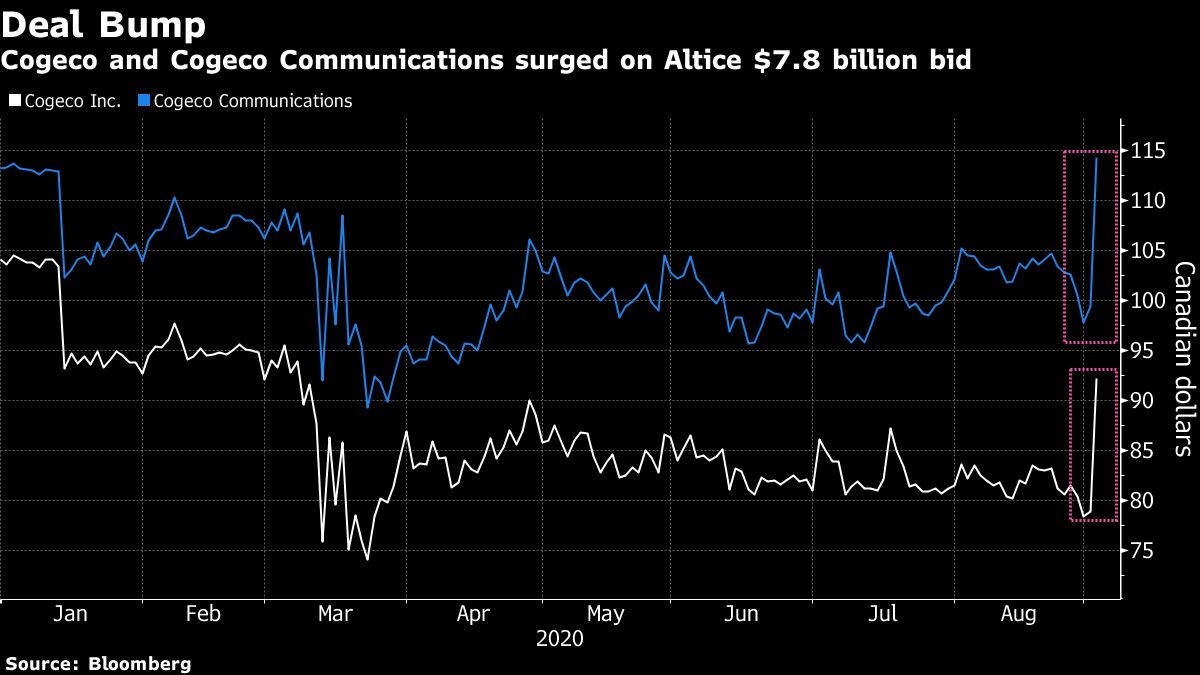 The Audets, though, say they’re not interested. The family holding company, Gestion Audem, doesn’t support the proposal and doesn’t intend to sell its shares, it said in a statement Wednesday.

“As Cogeco’s largest long-term shareholder with deep roots in Quebec, Rogers supports the value being created for all shareholders with the significant premium in the Altice USA offer,” Rogers spokesperson Sarah Schmidt said in an email, adding that it expects Cogeco’s board will act in the best interest of all shareholders.

Quebec’s nationalist government, concerned about hollowing out of the corporate sector, isn’t convinced the deal is good for the province. “We are in discussion with the Audet family to ensure the headquarters will stay in Quebec,” Mathieu St-Amand, director of communications for Quebec’s economy and innovation ministry, said in an email. “It is important for our government that its headquarters aren’t moved to Ontario or the United States.”

Federal antitrust issues are a lesser risk, Desjardins analyst Maher Yaghi said in a report. While Quebecor Inc. may not want Rogers to own cable assets in Quebec, he doesn’t expect significant pushback from Canada’s Competition Bureau or the Canadian Radio-television and Telecommunications Commission.

“We believe the convergence of wireless and wireline networks, as well as possible lower regulatory scrutiny in Canada post-pandemic, could create a favorable environment for the potential acquisition. However, we see meaningful deal risk at this point,” Yaghi said.

It’s not the first time Rogers has been part of a hostile play to gain a foothold in Quebec. In 2000, the company failed in a bid to acquire Quebec-based cable operator Videotron Ltd. Cogeco is a homegrown success story in French-speaking Quebec, founded in 1957 by Henri Audet from a single television station in Trois-Rivieres, which lies midway between Montreal and Quebec cities.

In the end, it may come down to price.

“The offer seemed to be about 8.5 times price-to-operating cash flow, that’s not exactly a rich valuation for taking out prime assets,” John Zechner, founder of J. Zechner Associates, which manages $1.2 billion in assets including shares of Rogers and Cogeco, said by phone. A more attractive evaluation could be somewhere between 8.5-12 times price-to-operating cash flow, but even that might not be enticing enough for the Audet family to let go of their controlling assets, he said.

“It now remains to be seen if Altice and Rogers will gain traction with their gambit, that may prove just an opening foray that might require further discussions around price and structure given that the Audet Family may not necessarily wish to receive proceeds entirely in cash,” Adam Shine, an analyst at National Bank of Canada, wrote in a note.