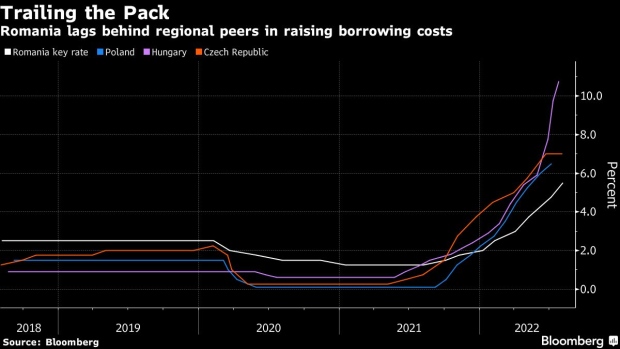 (Bloomberg) -- Romania raised its benchmark interest rate less than expected, easing the pace of the Balkan country’s most aggressive monetary-tightening campaign since the global financial crisis.

The central bank increased its key rate by 75 basis points to 5.5% on Friday. Only two out of 12 economists in a Bloomberg survey predicted the move, with the majority expecting a repetition of last month’s full percentage-point hike.

Policy makers have now lifted borrowing costs eight times in a year to tame the fastest surge in prices since 2003. Expectations for a repeat of July’s move rose after Governor Mugur Isarescu said the pace of tightening would be reduced once “the first signs of a slowdown in inflation” had been seen.

Price growth, which exceeded 15% in June, is poised to remain in double digits until next year, according to the central bank. In a new inflation forecast that they’ll present on Aug. 9, policy makers said inflation would peak in the third quarter, followed by a gradual decline.

Yet the authorities also face the risk of stifling Romania’s fragile economic recovery and lag the even more aggressive rate increases pursued by regional European Union peers such as Hungary, Poland and the Czech Republic.

A prolonged drought that’s impacting crops and food prices, combined with the war in neighboring Ukraine will continue to take a toll on the $250 billion economy, increasing budget spending and undermining exports.

The central bank has signaled that it aims to reduce the interest-rate gap versus peers, mostly Poland, while keeping market rates broadly in line with regional norms by tightly managing money market liquidity to keep the leu stable, Ciprian Dascalu, a Bucharest-based economist at Erste Group Bank AG who predicted today’s move, said before the decision.

“We see the terminal rate at 6.25% for the key rate by year-end and 7.25% for the credit facility, with the latter remaining the relevant operational policy instrument under firm liquidity management policy,” he said.