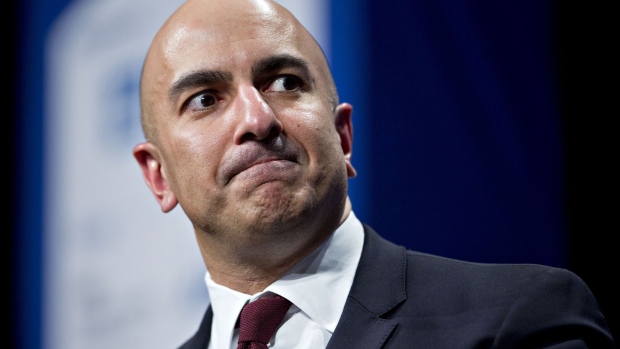 Neel Kashkari, president and chief executive officer of the Federal Reserve Bank of Minneapolis, pauses while speaking during a discussion at the National Association for Business Economics economic policy conference in Washington, D.C., U.S. , Bloomberg

(Bloomberg) -- Federal Reserve Bank of Boston President Eric Rosengren renewed his case against further interest-rate cuts this year as a fresh spate of commentary from U.S. policy makers highlighted the breadth of opinions among central bankers.

Rosengren, among the more hawkish members of the Federal Open Market Committee and a voter this year, argued that the Fed’s recent moves to lower rates are enough to address the risks threatening an economy that is otherwise in good shape.

‘Monetary policy is already accommodative,” Rosengren said in the text of a speech Friday in Madison, Wisconsin. “This is especially notable given that the average forecaster expects growth close to potential, with already-tight labor markets.”

The remarks contrast with comments from Minneapolis Fed President Neel Kashkari, one of the most dovish FOMC members.

“One big concern I have right now is the labor market shows signs of softening,” Kashkari earlier Friday told the Council on Foreign Relations in New York. “And now we have evidence that wage growth is softening.”

Kashkari, who is not a voter this year, said he would “probably” support a rate cut when Fed officials gather for their next meeting Oct. 29-30 in Washington.

The split reflects disagreement among Fed policy makers over whether the gloomy outlook for global growth and deteriorating business confidence amid the Trump administration’s ongoing trade disputes will cause a deeper slowdown in the U.S.

At their last gathering on Sept. 17-18, when the Fed eased policy, interest-rate projections suggested five officials opposed that cut, five supported the move and saw it as the last reduction this year, and seven others would support one additional decrease.

Speaking Thursday, Cleveland Fed President Loretta Mester added her voice to the wait-and-see camp. Without signs that weakness in investment and manufacturing is spilling over into hiring and household spending, she said holding rates where they are would be appropriate.

--With assistance from Matthew Boesler.

To contact the editors responsible for this story: Alister Bull at abull7@bloomberg.net, Scott Lanman