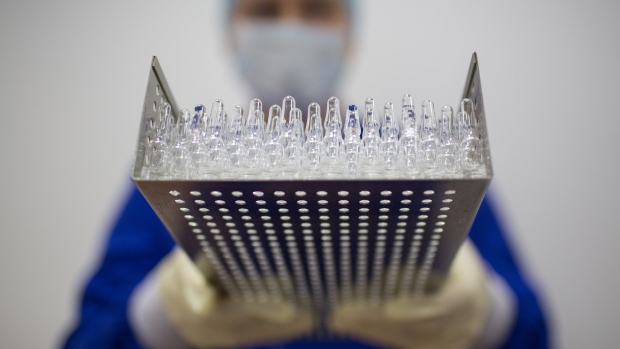 Russia brushed aside international concerns about the safety of the world’s first COVID-19 vaccine and announced it will start mass inoculation this month before clinical testing is completed.

“Western colleagues, who can sense the competitive advantage of the Russian drug, are trying to express some opinions that are completely unjustified in our view,” Health Minister Mikhail Murashko told a briefing on Wednesday. “This vaccine is a platform that is already well-known and studied,” he said, adding that other countries have developed antidotes under accelerated testing programs.

Authorities plan to start inoculating medical workers and other risk groups within two weeks on a voluntary basis, Murashko said. The vaccine will be available to the wider population from October.

President Vladimir Putin’s announcement Tuesday that Russia has cleared the vaccine for use was a propaganda coup for the Kremlin amid a global race to develop protection against the coronavirus pandemic and accusations that Russian hackers sought to steal international drug research.

It prompted doubts in other countries. German Health Minister Jens Spahn said he’s “very skeptical” about Russia’s vaccine in a radio interview Wednesday, adding that it could be dangerous. “It’s not about being first, it’s about having an effective, tested and therefore safe vaccine,” Spahn told DLF radio.

The disease has killed nearly 750,000 people, infected more than 20 million and crippled national economies. Companies including AstraZeneca Plc and Moderna Inc. are still conducting final-stage trials of their vaccines in studies that are expected to soon yield results.

Russia in a nod to Cold War rivalry named the vaccine Sputnik V, harking back to the Soviet Union’s achievement in launching the world’s first satellite into space in 1957.

The vaccine is being developed by Moscow’s Gamaleya Institute, the Defense Ministry and the sovereign Russian Direct Investment Fund, which have said it is undergoing Phase 3 trials, the final stage of testing during which thousands of people are inoculated to determine its fitness for use. A World Health Organization database lists the vaccine as still only in Phase 1 testing, the earliest stage.

RDIF says it will be able to produce more than 500 million doses a year in five countries. At least 20 countries are interested in obtaining supplies, it says.

The WHO said Russia is seeking prequalification of its vaccine, which will require a detailed review of data from clinical trials, the Interfax news service reported. Officials are waiting for Russia to provide the information, according to Interfax.

The speed with which the vaccine received regulatory approval has drawn domestic criticism, with a Russian association of multinational pharmaceutical companies calling the rushed registration risky.

“The risk from the vaccination is much lower than the risk from contact with the coronovirus and the consequences of catching this infection,” a Health Ministry official, Sergei Glagolev, said at Wednesday’s briefing.