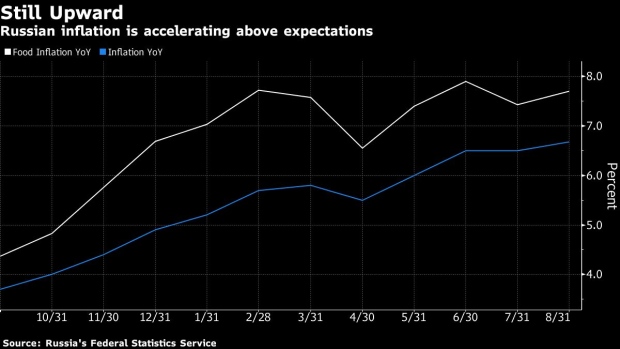 A customer shops for fresh produce inside a Magnit PJSC supermarket in Moscow, Russia, on Friday, May 21, 2021. Magnit, Russia's largest grocery chain, plans to acquire Dixy Holding Ltd. convenience-store network in a 92.4 billion ruble ($1.25 billion) deal, a move that will boost its presence in Moscow and St. Petersburg. , Bloomberg

(Bloomberg) -- It was a hot summer followed by a rainy autumn in much of Russia’s farm country. For the central bank, that could mean interest rates need to go higher and stay there longer.

Russia’s central bankers follow the farm sector very closely, since foods make up 40% of the basket used to calculate the consumer price index, a larger share than in many other countries.

“The borscht basket started to get cheaper faster this summer,” Bank of Russia Governor Elvira Nabiullina told reporters after a rate-setting meeting earlier this month, referring to the combination including beets, potatoes, cabbage and carrots that makes up the traditional soup. But that trend slowed late in August because of delays in bringing the harvest in, she said. “So it’s early to make conclusions.”

Since then, there’s been little sign of improvement, with weekly inflation remaining higher than usual for this time of year, according to economists. That’s raising the likelihood the central bank will deliver a bigger hike than its preferred modest step of 25 basis points at the next meeting on Oct. 22.

“We are now in a situation where seasonal deflation ended a week or two earlier than usual and annual inflation started accelerating more actively,” said Vladimir Tikhomirov, consultant at BCS. “The chances that the central bank will increase the rates have become rather significant. They may hike by 25 basis points or 50 basis points.”

One of the most aggressive in tightening monetary policy among emerging-markets central banks, the Bank of Russia has already delivered 250 basis points of rates increases this year but inflation remains at five-year highs. The central bank’s surveys show household inflation expectations remain near peakshighs reached in the summer.

“Unlike many of its peers, Russia’s central bank can’t afford to ignore fleeting swings in commodity prices. Inflation expectations are already rising, helping to extend an otherwise transitory spike.”

When and how the harvest comes in now is “the key factor” for the path of inflation, Economy Minister Maxim Reshetnikov said last week.

The weather this year has made forecasting even harder than usual, according to industry officials.

“Usually at this time we already understand what kind of harvest there will be, but we are just in the middle of harvesting now. If there is frost tomorrow, we won’t have a harvest,” said Tatiana Gubina, chief of staff at the Potato Union, a producers’ group.

Global food prices are at the highest in more than six years, fueled by a spike in the cost of everything from soybeans to palm oil because of vulnerable supply chains and adverse weather.

“The Russian harvest is powerless in the face of global food inflation,” Natalia Orlova, chief economist at Alfa-Bank in Moscow, who sees inflation peaking at 7.1%-7.2% in September, forcing the central bank to raise rates in October.