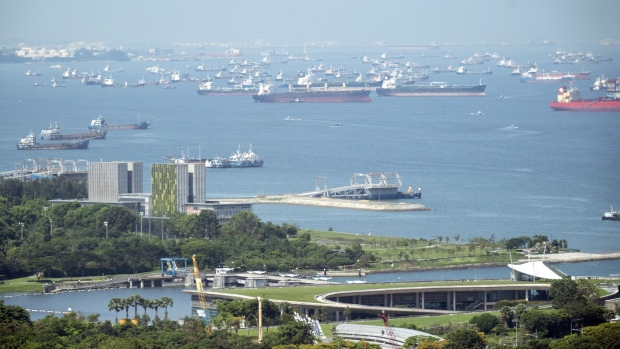 Snow rests on oil pipeline pipes on the Russkoye heavy crude oil field, operated by Rosneft PJSC, in the Yamalo-Nenets region of East Siberia, near Novy Urengoy, in Russia, on Thursday, Dec. 8, 2016. The surprise $11 billion sale of shares in oil giant Rosneft PJSC to Qatar's sovereign wealth fund and Glencore Plc caps a 2016 that's only gotten better for the Russian President Vladimir Putin as the political tide moved in his favor. Photographer: Andrey Rudakov/Bloomberg , Bloomberg

(Bloomberg) -- A proposed price cap on Russian oil got a mixed reaction from traders and consultants at Asia’s biggest oil conference in Singapore, labeled a “bad idea” and a “minefield” from some of the industry’s biggest names.

The price cap was a key talking point on day one of the Asia Pacific Petroleum Conference in Singapore, with FGE Chairman Fereidun Fesharaki reiterating an earlier assessment that it was “impractical, unnecessary, and a bad idea.” Trader Vitol Group noted the complexity of the cap, adding that it could act as a “relief valve” to an impending European Union ban on Russian imports.

“We need buy-in from governments, and governments to guide us because it’s a bit of a minefield,” Vitol Chief Executive Officer Russell Hardy said.

The US has championed the price cap and the Group of Seven Countries plans to implement the measure in line with the timing of EU sanctions in December. The mechanism is designed to cut Moscow’s energy revenues, while ensuring that the market isn’t starved of an important source of supply.

Here’s what panelists had to say about price cap:

“I cannot, after being in this business for 50 years, work out how to do it,” FGE’s Fesharaki said about the implementation of the cap. The plan appears to single out Russia, he said, noting that other sanctioned countries such as Iran are not subjected to similar measures.

The trader will assess any new developments on the proposed cap in the coming months “before we decide exactly what we think is right for Vitol,” the company’s CEO Hardy said during an opening address.

“The price cap working does not mean that all of Russia’s oil will trade at or below the price cap,” said Catherine Wolfram, deputy assistant secretary at the US Treasury. It means that Russian oil stays on the market, there’s no supply shock, and Moscow’s revenue falls, she added.

China will be able to continue direct crude purchases from Russia on its own vessels, and the implementation of a cap would help bring down prices in inter-governmental oil deals, she said. The US is in discussions with OPEC about the measure and its potential impact to prices.