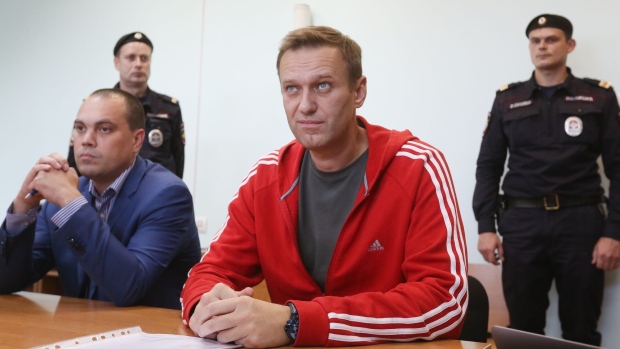 Alexey Navalny, second right, during a hearing at the Simonovsky District Court in Moscow, on Aug. 22, 2019. , Bloomberg

If convicted, Navalny and his colleagues could face as much as a decade in prison. The probe is the latest in a rising tide of legal pressure prosecutors and investigators have put on the activist and his supporters this year. It follows his jailing in January after he returned from Germany, where he was recovering from a nerve-agent poisoning that he and western governments blame on the Kremlin.

Russia denies any involvement in his illness and officials have accused him of working as an agent of the U.S. and its allies. Navalny and his allies dismiss those claims. He’s now serving a 2 1/2-year prison term for violating the terms of a suspended sentence by failing to report to authorities when he was recovering in Germany last year.

In June, a Russian court banned his Anti-Corruption Fund an “extremist” organization, drawing criticism from the U.S. and other western countries.

“This is already the FOURTH criminal case opened against Alexey since he’s been in prison,” spokeswoman Kira Yarmysh wrote in Twitter.

The new probe seeks to hold him and his allies responsible for operating the group before that date, according to a statement from the Investigative Committee Tuesday. Several of the allies listed as potential suspects in the case have already fled Russia after other criminal prosecutions.

Conviction under extremism the statute carries a sentence of up to 10 years in prison, as well as heavy fines. In August, the Investigative Committee said it was investigating Navalny for creating a group that infringed on the rights of citizens, a law typically used against cults. The penalty under that would be as much as three years in jail.