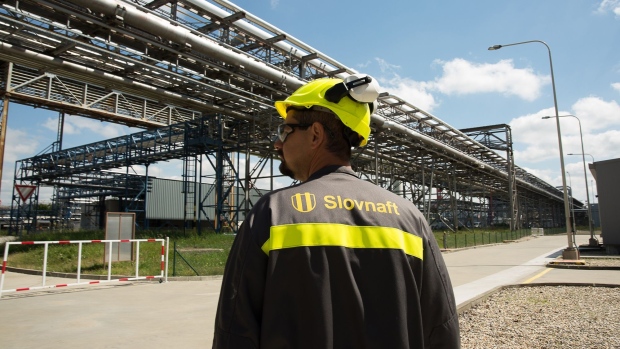 (Bloomberg) -- Russia resumed oil flows through a pipeline to central Europe after Hungary’s sole refiner stepped in to resolve a tussle over the payment of a transit fee, easing fears of a supply crunch in the region.

Slovakia began to receive Russian crude via the link across Ukraine, Hungarian refiner Mol Nyrt confirmed in a statement on Wednesday. Russia’s oil will reach Hungary starting Thursday. The transit fee payment agreement covers only flows to Slovakia and Hungary, not the Czech Republic, according to Slovnaft, part of Mol Group.

Earlier, Russia’s Transneft PJSC spokesman Igor Dyomin told Bloomberg that flows toward the southern leg of the Druzhba link were resuming as planned. The Russian crude-pipeline operator received confirmation from Ukraine, key transit country for the deliveries, that it was ready to resume the traffic, Dyomin said.

Once fully restored, the flows will resolve one of the many energy-supply risks faced by Europe. If the shutdown had been prolonged, Hungary could have suffered road fuel shortages. However, the continent is still grappling with constrained supplies of Russian natural gas and low river levels that are hindering the distribution of coal and diesel.

Global crude benchmark Brent, which initially jumped on Tuesday when the Druzhba halt was announced, retreated 1.9% to $94.46 a barrel as of 3:50 p.m. in London.

The southern leg of the Druzhba pipeline, which delivers Russian crude through Ukraine to Hungary, Slovakia and the Czech Republic, had halted operations on Aug. 4 after European banks refused to transfer a payment from Transneft to its Ukrainian counterpart Ukrtransnafta JSC amid European Union sanctions.

The dispute was resolved after Hungary’s Mol, which also owns Slovakian refiner Slovnaft, paid the transit fee to Ukraine on Wednesday. The halt of the Druzhba pipeline had put renewed pressure on already-tight fuel supplies in Hungary, prompting warnings against panic buying.

The return of the southern Druzhba flows should prevent the worsening of what was already a tight market for fuels in Central Europe at the start of refinery maintenance season. Germany’s Bavaria region, Austria and Switzerland have also been grappling with curtailed supplies, exacerbated by a squeeze in deliveries via the Rhine river, which is forecast to become impassable to shipping within days due to a drought.

Crude flows via the northern section of Druzhba through Belarus to Poland and Germany were not affected by the dispute.