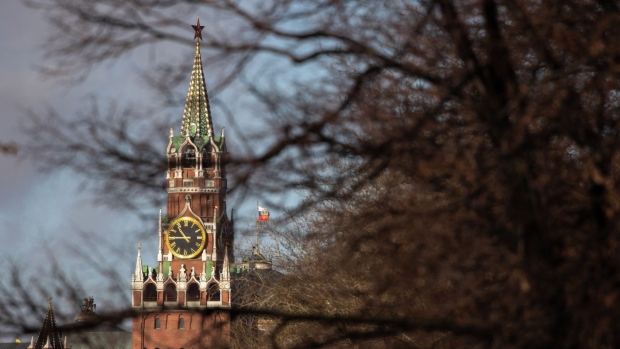 The Spasskaya tower of the Kremlin in Moscow, Russia, on Tuesday, Feb. 22, 2022. The ruble tumbled the most since March 2020 after President Vladimir Putin recognized self-declared separatist republics in east Ukraine, deepening a standoff with the West. Photographer: Andrey Rudakov/Bloomberg , Bloomberg

(Bloomberg) -- Bondholders are in for a tangled mess of financial, political and legal wrangling if sanctions push Russia to a historic default.

So far, Moscow has been able to navigate the restrictions to service its international debt, but that’s likely to change after the US closed another avenue to creditors, affecting about $100 million in payments due on May 27. The European Union has also sanctioned Russia’s central depository, which said it would suspend euro-denominated transactions.

The sanctions, as well as Russia’s capital controls, mean that what happens next is unlikely to follow the traditional playbook of negotiations with creditors, debt restructuring and currency devaluation. It’s not even clear if and how any default will be declared.

Here are some of the possible next steps, according to lawyers following the developments.

Is Russia Headed for a Default?

The country has a 30-day grace period to find a solution to the payments due late last month on the 2026 and 2036 dollar and euro-denominated bonds. Even if it runs out of time, whether or not it’s a default depends on who you ask.

Russia said its accounts at the National Settlement Depository have already been debited. Moscow argues that it’s done its part, and bondholders are likely to claim that unless they get the cash, it doesn’t count.

“Russia is able and willing to make payments,” said Darshak Dholakia, a partner at Dechert LLP. “This could strengthen Russia’s arguments to investors -- and potentially in court if default is declared -- that the bonds are not in default as the lack of payments are due to the actions of the US government.”

Russia has said that if it can’t pay in foreign currency, it will resort to rubles. That’s listed as an “alternative payment currency” in the prospectus for the 2036 bond, but it needs to notify bondholders 15 business days before the payment is made. It can’t do the same for the 2026 bonds; euros, British pounds or Swiss francs are options, but again, Russia needs to notify investors at least five days before making the payment.

As Russia tries yet again to dodge default, it’s also working on another bond-payment mechanism to sidestep US sanctions. In interviews with the Russian press, Finance Minister Anton Siluanov said this process would allow investors to access funds without restriction. It’s uncertain when it will be ready and whether it will work.

Who Calls the Default?

If the grace period is up and bondholders are still out of pocket, a declaration of default would usually come from ratings firms, but the European Union has banned them from covering Russia. According to the prospectus, bondholders can call one themselves if holders of 25% of the outstanding bonds agree that an “Event of Default” has occurred.

Still, creditors don’t need to act immediately, and instead can wait to monitor the war in Ukraine and the level of sanctions. They’d have time, as the claims don’t become void until three years from the payment date, according to the bond documents.

“I would expect bondholders over time to first call a default, then bring legal actions to crystallize their claims, to be better positioned for what’s going to happen,” said Dennis Hranitzky, head of the sovereign litigation practice at law firm Quinn Emanuel. “But I expect all of that to unfold in a gradual and thoughtful way.”

Who Is Going to Sue?

Yannis Manuelides, a partner at Allen & Overy, said Russia might be better off waiting for bondholders to start proceedings by choosing a jurisdiction, and accept or reject it. Russia would still have the chance to make its arguments, even if the creditors are the ones commencing the proceedings. In fact, it could be harder for the sovereign to find a jurisdiction willing to hear its case, given the current sanctions.

Still, Russia’s Siluanov has said a number of times that the government is ready to take legal action. If it does, it would be submitting to a judicial process and providing a forum to discuss the circumstances that led up to the sanctions, according to Manuelides.

A legal procedure could even be started by one of the banks in the payment chain, according to Christopher F. Graham, a bankruptcy and restructuring partner at White and Williams in New York.

If the money is with one of the intermediaries, “the intermediary or indenture trustee could start what’s called an inter-pleader, deposit the money with the court and tell the court, ‘We have this money, we’ve got this indenture, and now we have all these sanctions, so please tell us what we should do’,” he said.

Does Russia Have a Case?

Under English law, Russia could argue that it fulfilled its end of the bargain, according to two London-based lawyers, speaking on condition of anonymity as they are in talks with the parties involved. The bonds are governed by English law, but there’s no jurisdiction clause in the documentation.

“Russia may attempt to argue in such a lawsuit that the sanctions rendered its performance of the contract ‘impossible,’ a recognized legal defense in Anglo-American contract law,” said Elena Daly, founder of EM Conseil, a Paris-based advisory firm specializing in sovereign debt management.

One angle is force majeure, and although sanctions historically haven’t fallen under this category, the sovereign and its legal counsel might still give it a go. A counter argument could be that Russia itself created the circumstances that frustrated the contract by attacking the sovereignty of another country.

How to Enforce a Ruling?

Investors will look at where it would make sense strategically to commence proceedings, where Russia’s assets are and to what extent there will be a recognition of any judgement, said Deborah North, a partner at Allen & Overy. England may prove the most likely choice. But then there’s the matter of enforcement.

Assets of the central bank have a higher level of protection, and so do diplomatic assets, which are protected under the Vienna Convention. Investors would need to look for things like airplanes, shareholdings, real property assets, bank accounts of the Ministry of Finance, and to find them in jurisdictions that would enforce a ruling by, for example, an English or US court.

One of the issues, though, is that the documents don’t have a waiver of sovereign immunity. That’ll make enforcing any ruling difficult.

Read More: US Should Have Let Russia Continue To Pay Foreign Debt: Q&A

Is There an Alternative?

Bondholders could kick start an arbitration claim based on investment treaties (bilateral or multilateral agreements) between Russia and the countries where the investors are based. These international treaties protect investments in case of violations of investor rights. The award of that dispute settlement could be enforceable where a court judgment isn’t.

Another option is an out-of-court, consensual restructuring of Russia’s sovereign debt, although that’s difficult given all of the sanctions and the reputational issues that bondholders would face.

What are Bondholders Doing Now?

While they haven’t formally organized yet, bondholders have discussed their options with different law firms, according to people with knowledge of the matter, who spoke to Bloomberg on the condition of anonymity.

“The more speculative questions we’ve been getting are, ‘Do I want to buy this as a distressed debt play?’ If you have enough of a risk appetite you could,” said Paul Marquardt, a partner at Davis Polk & Wardwell LLP. “Who knows when this is going to be resolved. Trying to size and price that risk is the hard part.”