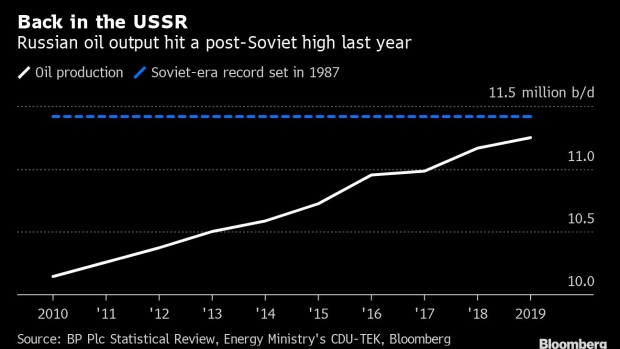 (Bloomberg) -- Russia’s crude oil and condensate output hit a post-Soviet high last year even as it limited production under an agreement with OPEC.

The country produced 560.2 million tons of oil in 2019, up 0.8% from the previous year, preliminary data from the Energy Ministry’s CDU-TEK unit show. That’s equivalent to 11.25 million barrels a day, according to Bloomberg calculations. Russia produced a record 11.416 million barrels a day in 1987, BP Plc data show.

One of the architects of the original OPEC+ deal, Russia’s record production showcases its insufficient compliance with the agreement. It consistently failed to meet the quota last year, overshooting its target in nine of the 12 months, Bloomberg calculations show. The Energy Ministry has come up with various explanations for producing above the target -- from the limitations of a harsh climate to technical issues after the Druzhba oil-contamination crisis.

Under the OPEC+ deal, Russia pledged to cut output by 228,000 barrels a day from the October 2018 baseline of 11.418 million barrels a day. That allocation will change this month after the Organization of Petroleum Exporting Countries and its allies agreed in December to deepen their cuts.

Saudi Arabian Energy Minister Prince Abdulaziz bin Salman has urged the laggards in the deal to carry their share of the burden. The kingdom is making the deepest cuts in the group.

Russia has agreed to deepen its reductions by 70,000 barrels a day to about 300,000 a day in the first quarter. But its baseline and monthly production calculations will exclude a type of light oil called condensate, potentially making it easier to hit its cuts target.

Energy Minister Alexander Novak has denied that the change is a loophole allowing Russia to pump more oil and still claim compliance. While Russia’s official statistics don’t yet provide a breakdown for crude and condensate, the ministry will regularly inform analysts, the media and OPEC about the composition of its output, according to Novak.

Russia has also started making noises about the future of the OPEC+ alliance. When ministers meet next in March, the group will have been restricting output for more than three years, compared with an initial plan for six months. During the meeting, Russia may bring up the issue of exiting the agreement, Novak said in an interview to state TV network Rossiya24 last month.

“Oil production cuts can’t be eternal,” Novak said, adding that Russia needs to defend its global market share and let its oil companies develop new projects. “We will gradually need to make a decision on exiting” the accord, he said.

Ending the deal would allow Russia to deploy about 500,000 barrels a day of spare production capacity, which could pave way for a new output record in 2020.

To contact the editors responsible for this story: James Herron at jherron9@bloomberg.net, Rakteem Katakey