A Russian invasion of Ukraine could get us to $100 oil: RBC's Helima Croft

Russia may be able to deliver only about half of its scheduled increases in crude production over the next six months, joining the ranks of OPEC+ nations that are struggling to ramp up even as fuel demand rebounds from the pandemic.

With crude already trading above US$85 a barrel in London, the outlook for Russian output leaves the global market looking even tighter than expected. It risks amplifying the energy-price surge that’s contributing to the highest inflation in decades.

The OPEC+ member is supposed to be adding 100,000 barrels a day of crude to the market each month, but growth ground to a halt in December. Due to a decline in drilling last year, most analysts polled by Bloomberg News expect Russia’s actual monthly increases can go no higher than 60,000 barrels a day in the first half of 2022.

The Organization of Petroleum Exporting Countries and its allies are in the process of restoring output halted during the pandemic. The coalition is supposed to pump an additional 400,000 barrels a day each month, yet the actual production increases have fallen short due to factors ranging from internal unrest to insufficient long-term investment in a number of countries.

Last month, OPEC boosted output by just 90,000 barrels a day. Russia’s production started stagnating in November, and in December it dropped below its OPEC+ quota for crude, according to Bloomberg estimates based on Energy Ministry statistics. The first days of January brought a less than one per cent rise in the country’s total petroleum output, which includes crude and a light oil called condensate that is extracted from natural gas, according to Interfax.

Russia’s top oil official, Deputy Prime Minister Alexander Novak, has said the country will continue to hit its production targets. Output of crude will rise to 10.1 million barrels a day this month, he told the Tass news agency last week. That would be in line with its OPEC+ quota and an increase of about 100,000 barrels a day from December.

If OPEC+ continues to struggle to hit its production targets, there may be wider economic consequences. The recovery in oil demand has remained robust as the Omicron strain of the coronavirus has a milder effect on the global economy than anticipated.

Brent crude, the international benchmark, has jumped more than 10 per cent since the start of the year and may have further to go, according to Vitol Group. High energy prices are a significant contributor to rising inflation and the White House has consistently applied pressure on OPEC+ to boost supply and help curb fuel costs. 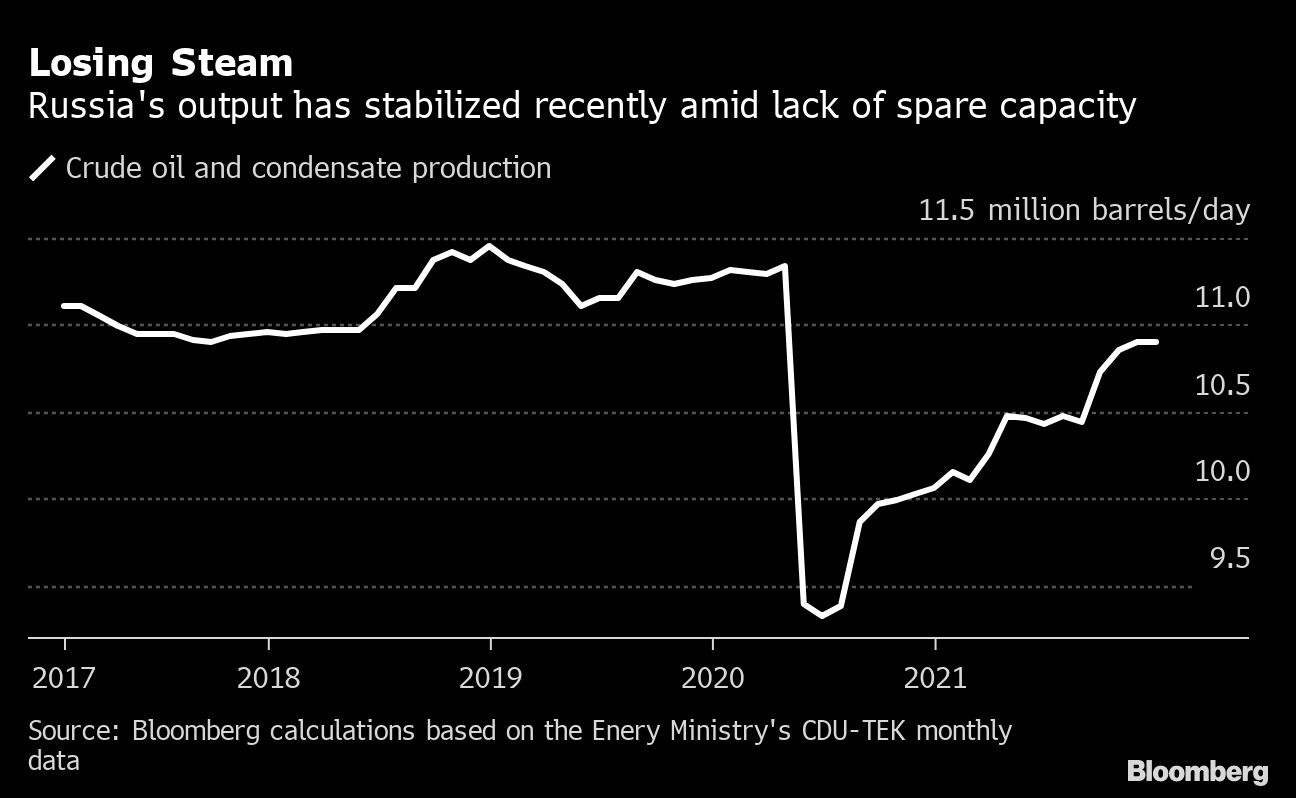 Through most of 2021, Russia maintained fairly consistent monthly production increases as it restored capacity idled in the early stages of the Covid-19 pandemic. By November, the revival started to run out of steam.

The spread of active, idle and shut-down Russian production wells returned to pre-pandemic levels, indicating that the industry had nearly fully deployed its spare capacity. That was later confirmed by statements from the country’s largest producers, Rosneft PJSC, Lukoil PJSC and Gazprom Neft PJSC. 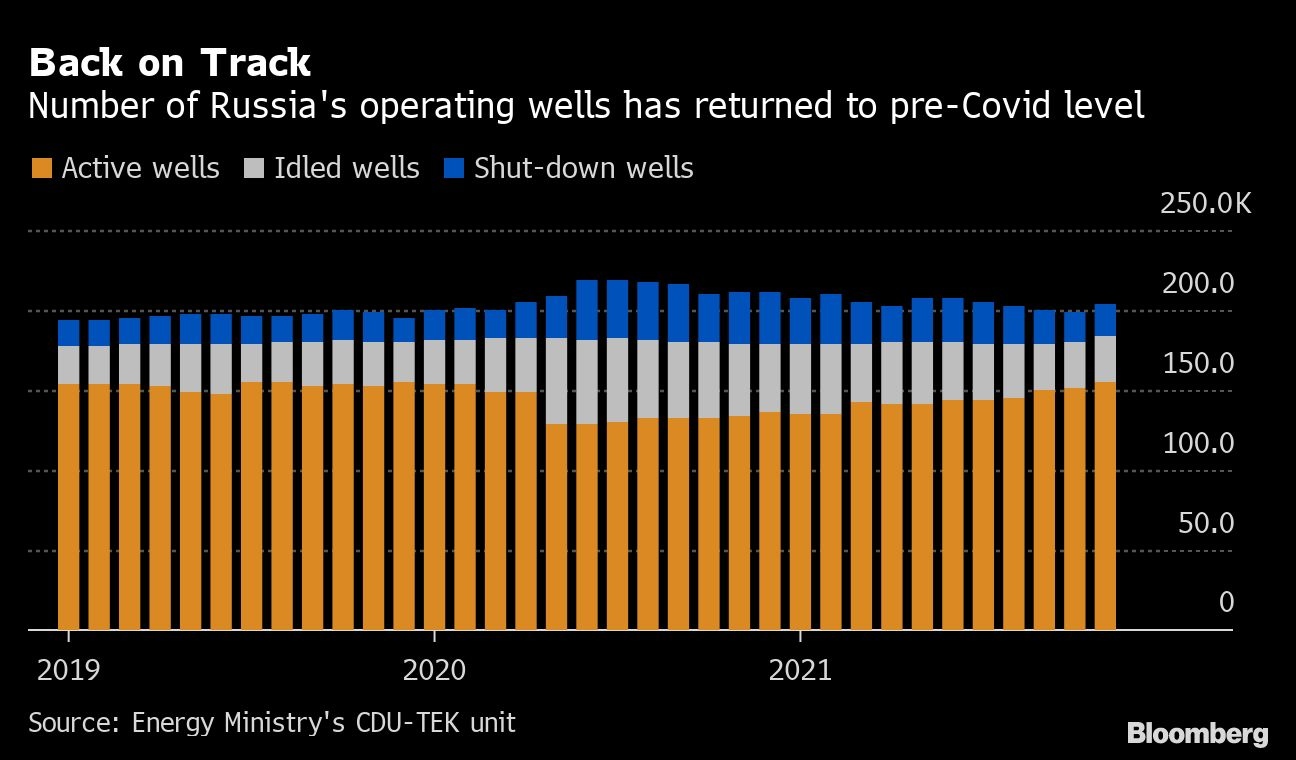 Last year, Russian oil majors were in no hurry to boost their production drilling, a move that would have enabled new capacity to be brought onstream in late 2021 and in 2022. By the end of November, overall drilling rates for the year were down 4.5 per cent compared to the same period in 2020, according to Interfax data based on the Energy Ministry’s CDU-TEK figures.

The Russian oil industry has been in wait-and-see mode due to the uncertainty around the effect of the coronavirus on demand, according to analysts from Bank of America and Vygon Consulting. Several companies also capped production last year after some of their projects lost tax breaks.

These producers “are rather unwilling to invest” in those projects until they find out whether the Finance Ministry will bring some of those incentives back, said Daria Melnik, a senior analyst at Oslo-based consultant Rystad Energy A/S. The government is ready to consider some tax breaks from 2023 at the earliest, provided that the OPEC+ output cuts end this year as planned, Deputy Finance Minister Alexey Sazanov told Bloomberg last month. 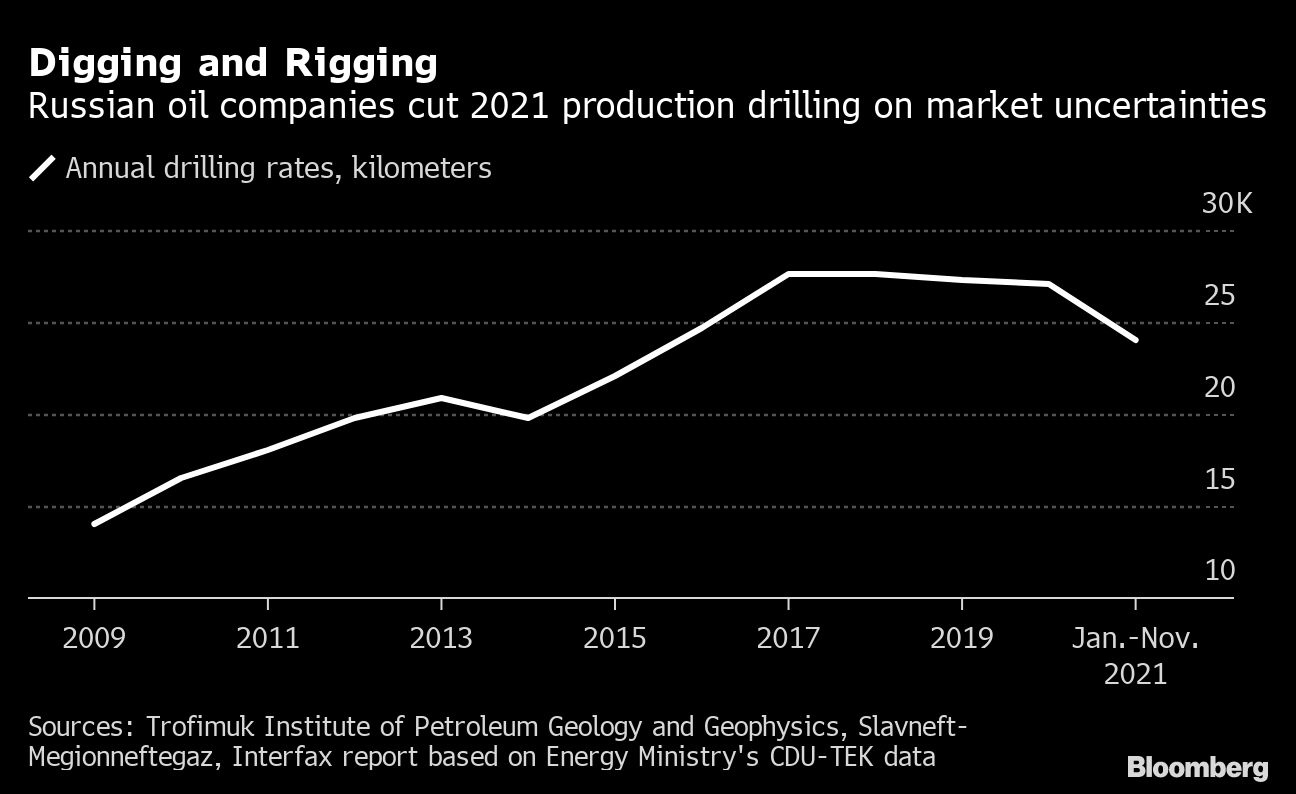 This year, most major Russian producers plan to increase capital expenditure, varying from a boost of around 10 per cent at Gazprom Neft to some 20 per cent at Rosneft. Tatneft PJSC expects its 2022 upstream investments to grow as much as three to four times compared with last year.

This increase in drilling will eventually deliver higher output, but most of the gains will come after 2022. The new wells will generate only a modest increase this year, according to analysts from Rystad Energy to Renaissance Capital.

Rosneft, which accounts for a significant part of total spending in the Russian oil industry, “is now channeling money into its Vostok Oil project, it’s the producer’s main priority,” said Melnik. The company plans to start large-scale crude production at the Arctic project in 2024.

Gazprom Neft’s Zima cluster of new fields in Western Siberia, which analysts from Renaissance Capital and Rystad Energy name as a source of new crude for the producer in 2022, will reach peak output in 2024. Its Arctic oil-rims project is already producing, but will ramp up gradually, doubling over five years.

This explains why most observers see Russia falling short of its targets in 2021. “We don’t expect Russia to raise its output by 100,000 barrels per day on any month this year,” said Melnik.