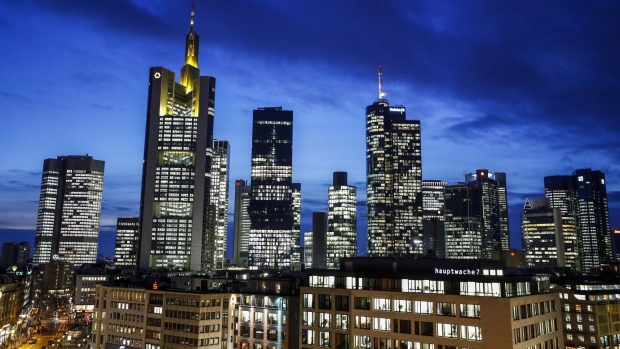 The Commerzbank AG headquarters, second left, and the Deutsche Bank AG twin towers, right, stand illuminated with other skyscrapers in the financial district in Frankfurt, Germany, on Monday, Jan. 13, 2020. Germany’s economy probably grew at the weakest pace since 2013 last year as carmakers to machinery makers were hit by trade tensions and the U.K.’s impending exit from the European Union, a report is expected to show Wednesday. , Bloomberg

A spokesman for Germany’s BSI Federal Cyber Security Authority said the agency has no knowledge of such an attack. Bild said the BSI confirmed the hack on Wednesday, and cited unidentified sources as saying it may be revenge for international sanctions leveled on Russia and Belarus.

Spokespeople for Deutsche Bank AG and Commerzbank AG and for lobby groups for savings, cooperative and private lenders said they were looking into the report. Germany’s BaFin financial regulator and the European Central Bank did not immediately respond to requests for comment.

With elections looming in September, and Chancellor Angela Merkel poised to step aside, German authorities are aware of the potential for interference from Russia, both in terms of cyber attacks on infrastructure as well as disinformation campaigns.

The Green party’s chancellor candidate, Annalena Baerbock, has become a target given her strong opposition to the almost-completed Nord Stream 2 pipeline that would channel gas from Russia to Germany.

Fancy Bear is controlled by Russia’s GRU military intelligence agency and was behind the hacking of Hillary Clinton’s staff before the 2016 election, according to a 2018 U.S. Department of Justice indictment.

The group is thought to be responsible for a number of prominent phishing attacks globally. Last year, Microsoft Corp. reported that about 200 organizations directly or indirectly tied to the U.S. election and political organizations in Europe were targeted by it.

Russia has repeatedly denied state involvement in hacking. President Vladimir Putin told reporters after his summit with U.S. President Joe Biden this month that the two sides had agreed to “start consultations” on cyber security, adding that the sides should “discard all conspiracy theories” about attacks.

After cyber attacks in the U.S. linked to Russia in December, Kremlin spokesman Dmitry Peskov rejected allegations of Russian involvement, saying “ there’s no need to immediately blame the Russians for everything without basis.”