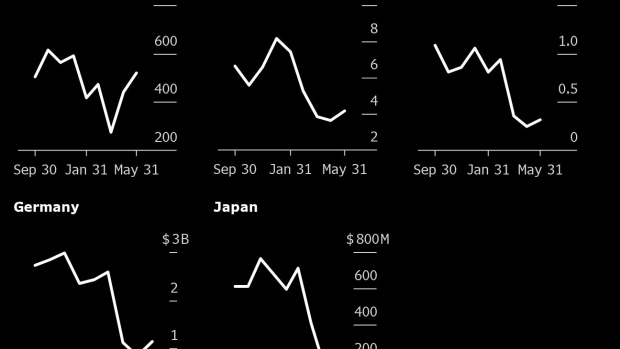 Russian imports picked up a bit in May, even from some countries that have joined the US and its allies in imposing sanctions over the Kremlin’s invasion of Ukraine, as the economy showed signs of stabilizing.

Trade flows into Russia still remain far below pre-invasion levels, but imports for the five major trading partners were down 29% in May on year, compared with a 43% drop in April. Bloomberg calculated the figures based on reports from those countries, which account for about half of Russian imports. Russia stopped releasing detailed trade data after the invasion.

Still imports from the five countries in May exceeded March levels. Turkey, which hasn’t joined the sanctions, saw exports to Russia jump to the highest since December.

“Logistics readjustment, ruble strength, relatively sustained domestic demand are all supporting imports,” said Sofya Donets, economist at Renaissance Capital. “But it’s premature to be optimistic: part of investment import will be limited by sanctions and not all import may be substituted from friendly countries.”

The plunge in imports, combined with surging revenue from exports of oil and gas, has helped contribute to a record current-account surplus so far this year that’s pushed the ruble to the highest levels in seven years.

Economy Minister Maxim Reshetnikov said late last month that imports in May were down about 30% compared to pre-war levels, up from the 40% level seen in preceding months. But he warned that the bulk of the improvement came from consumer goods, with intermediate and investment imports still down sharply.