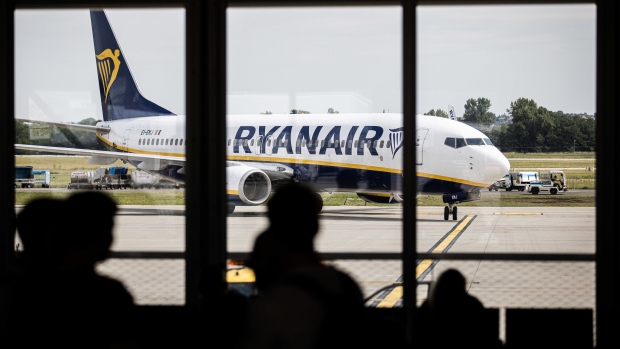 A Ryanair Holdings Plc passenger aircraft taxis towards a gate at Budapest Ferenc Liszt International Airport in Budapest, Hungary, on Wednesday, Aug. 4, 2021. The Hungarian government has made a non-binding offer to buy Budapest Airport, according to people familiar with the matter, as Prime Minister Viktor Orban seeks to gain control of what had been one of the fastest growing hubs in the region before the coronavirus pandemic. , Bloomberg

Ryanair Holdings Plc is gaining confidence that travel will make a strong comeback this year as concern about the omicron variant of Covid-19 fades in Europe.

The region’s biggest discount airline will deploy more capacity this summer than in the pre-pandemic year of 2019, after cutting seats in January and February because of the new viral strain, said Eddie Wilson, head of the Irish group’s main Ryanair unit.

“Once restrictions at destinations have been lifted I think we’re going to see a snap back in travel,” Wilson said in an interview Thursday. People will conclude: “I’m vaccinated, I’m boosted, the airlines are back flying, let’s go on holiday,” he said.

Ryanair last month forecast a wider loss for the year ending in March, after the emergence of omicron plunged European travel into renewed uncertainty. Wilson’s comments suggest the company sees no carry-over into the vital summer season. The U.K., its biggest market, could drop all Covid tests for vaccinated travelers in time for school holidays next month, the country’s Times newspaper reported Jan. 15.

Wilson said he also sees an increase in fares as flying resumes and an overall 10%-15% reduction in capacity across Europe’s airlines after pullbacks during the pandemic. Ryanair’s occupancy levels edged above 85% in November before the new variant hit and the aim is to get back to 95%, he said.

The executive, who announced new routes from Dublin, said expansion will be focused on those airports prepared to cut the best deals, citing agreements at hubs including London Stansted, Brussels Charleroi and Milan Bergamo and new bases in Turin and Venice.

Wilson said there are currently no talks with Boeing Co. on Ryanair’s next aircraft order after negotiations broke down last year, adding that the U.S. manufacturer needs to make a more competitive offer after some other narrow-body customers defected to Airbus SE.

“Boeing have got to get the pricing right,” he said. “They’re under pressure. They know exactly where we stand so we’ll wait to hear from them. We’ve got more than enough aircraft to do what we’re doing.”