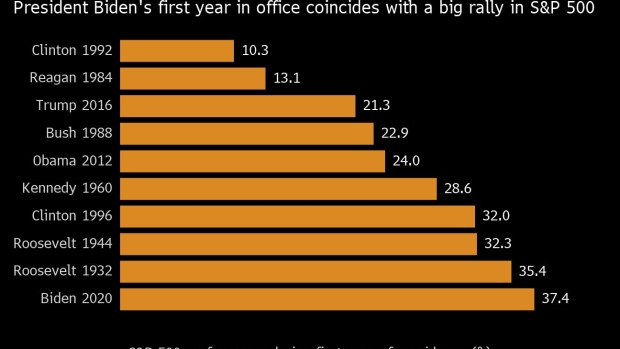 The benchmark index gained more in the past year since the 2020 election than any other modern president has seen in their first year in office. But the advance has more to do with the “everything rally” following the vaccine rollout than any specific policy decision, Charles Schwab UK Managing Director Richard Flynn said in a note.

“While presidents are always quick to take credit for strong performance and quick to blame their predecessor for poor performance, it is likely that they are responsible for neither,” Flynn wrote.

The gains come as the results of Tuesday’s elections offered a warning shot to Biden and the Democrats after Republicans won in key races. While the stock market has rallied to all-time highs, the nation’s mood has been less bullish amid rising prices and mixed economic reports.

The last time the S&P 500 recorded a post-election day annual gain above 30% was after Bill Clinton’s re-election in 1996. The index gained 21% during Donald Trump’s first year.