U.S. equities climbed to a record and benchmark Treasury yields extended declines to the lowest since March as investors bet that the Federal Reserve will maintain its ultra-accomodative policies even after data showed consumer prices rose more than forecast last month.

The S&P 500 led the major American equity indexes higher, closing at an all-time high. The tech-heavy Nasdaq 100 rose to its highest level since late April as megacap technology stocks rallied. The 10-year Treasury yield fell to as low as 1.44 per cent after initially surge in the wake of the inflation report.

The consumer price index data released Thursday showed that the increase in May was driven largely by categories associated with a broader reopening of the economy as vaccinations bring the pandemic under control. The report comes amid a debate about whether the Fed can stick to the dovish stance that has helped lift markets in the face of a strengthening economy that brings the risk of destabilizing inflation. Rangebound trading in equities and falling yields had characterized the start of June as investors awaited some impetus from progress reports on the recovery. A frenzy in meme stocks and gyrations in cryptocurrencies have been among the few sources of pronounced market volatility. 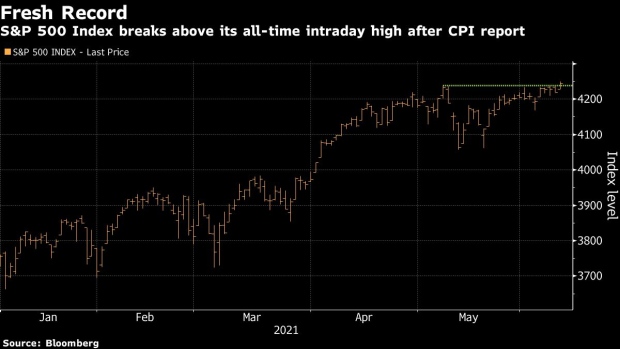 “The frothiness in CPI continues for now but between base effects and pent-up demand pressures, it is probably not giving a definite answer to the great inflation debate, and you need to read the bond market tea leaves,” said Anu Gaggar, senior global investment analyst at Commonwealth Financial Network. “The 10-year Treasury yield is back at levels last seen in early March, signaling that the bond market is falling in line with the Fed’s thinking that inflation is transitory and does not warrant tapering of monetary stimulus any time soon.”

Seven of the main 11 S&P 500 industry groups climbed, with health-care stocks leading the advance. Financial stocks were the outliers, with large banks including JPMorgan Chase & Co., Bank of America Corp. and Wells Fargo & Co. among the biggest laggards in the broader index. Amazon.com Inc., Microsoft Corp. and Tesla Inc. contributed the most to the Nasdaq 100’s gain. The Dow Jones Industrial Average ended the session little changed, with financial stocks including Goldman Sachs Group Inc. and American Express Co. among those weighing it down.

GameStop Corp. fell the most since March after the company said it planned to offer more shares and disclosed that regulators are investigating trading of its stock. Other retail trader favorites were mixed, with some of the stocks that surged amid the frenzy on Wednesday giving back gains.

European stocks closed little changed at a record high, with defensives rallying after the European Central Bank raised its inflation forecast and renewed its pledge to maintain faster emergency bond-buying to sustain the euro area. The Stoxx Europe 600 Index was up less than 0.1 per cent at the close, with banks outperforming. With European equities notching several fresh records in June, investors are growing increasingly sensitive to data and policy statements on inflation that could signal an earlier end to central-bank largesse than expected.

Commodities, one of the leading reflation plays, resumed gains, with the Bloomberg Commodity Index trading around the highest since 2015.