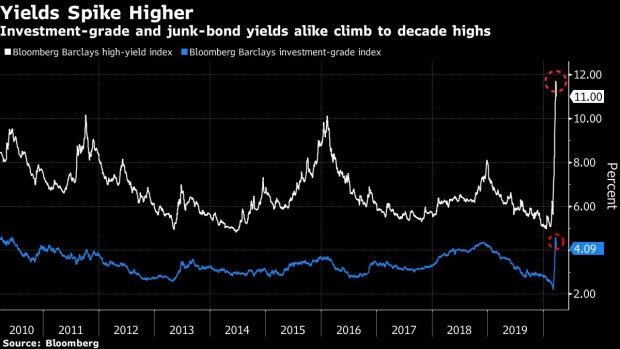 (Bloomberg) -- S&P Global Ratings and Moody’s Investors Service are downgrading U.S. companies at the fastest pace in more than a decade as debt-saddled corporations and entire industries struggle with a dramatic slump in demand brought on by the coronavirus pandemic.

Downgrades are outpacing upgrades at the two biggest credit-rating firms by more than 3 to 1 to start the year, the most on a quarterly basis since the depths of the financial crisis, according to data compiled by Bloomberg. At the same time, risk premiums on investment-grade bonds have surged, while junk yields breached 10% for the first time in more than eight years.

From autos to oil, investment grade to high yield, few parts of the American credit landscape have been spared the onslaught of downgrades that has accompanied the Covid-19 outbreak. With an unprecedented number of companies loading up on cheap debt in recent years, it’s likely that more are on the horizon. And concern is mounting that a wave of defaults could soon follow as capital markets remain closed to all but the safest borrowers.

“Entities at the lower end of the spectrum, particularly B- and CCC, those types of companies in the sectors that are heavily hit by social distancing are facing an existential crisis,” said Gregg Lemos-Stein, head of analytics and research for corporate ratings at S&P. “We expect defaults to be much higher.”

S&P has cut more than 280 long-term ratings so far this quarter, also on pace to be the most since the crisis, the data show. Of them, over 170 have come this month alone. Roughly 75 companies have been upgraded in 2020. Moody’s has downgraded more than 180 companies, including about 20 investment-grade firms and 160 junk-rated borrowers.

Investors are particularly concerned about the companies with trillions of dollars of debt sitting on the last rung of investment grade, potential so-called fallen angels. A downgrade to junk status could drive up their borrowing costs even further and fuel a wave of selling from investors who aren’t allowed to hold such low-quality debt.

Ford Motor Co. became the largest fallen angel of the current downgrade cycle on Wednesday after it was cut to junk by S&P. The new speculative-grade designation will remove its $35.8 billion of debt from the Bloomberg Barclays investment-grade index at the end of the month.

“We do expect fallen angel volumes to pick up significantly compared to the last fews years,” said Shobhit Gupta, a strategist at Barclays Plc. He noted that this will likely be driven by the energy sector given plunging crude prices.

Occidental Petroleum Corp. is the second-largest fallen angel this year after getting cut to junk by Fitch Ratings earlier this month. Its $35.2 billion of debt is similarly bound for high-yield gauges.

Even companies with cleaner balance sheets in the A rated tier are at risk of being cut, further bloating the ranks of BBB debt, according to CreditSights strategist Erin Lyons.

Boeing Co.’s long-term rating was cut from A- to BBB by S&P last week and was slashed two notches to BBB by Fitch on Tuesday. Carnival Corp. also lost its A grade rating from both Moody’s and S&P this month.

“They generate a lot of free cash flow, they have plans to pay down debt and that works great until the options are not there and the cash is not being generated,” Lyons said referring to the A bucket broadly.

Far down the rating ladder, the outlook is even bleaker. Industries from travel to retail to entertainment have been brought to a near standstill, while the leveraged loan and high-yield bond markets remain virtually frozen.

“This is an extremely severe cycle that will wipe out a lot of very higher leveraged, lower-rated entities,” Lemos-Stein said.