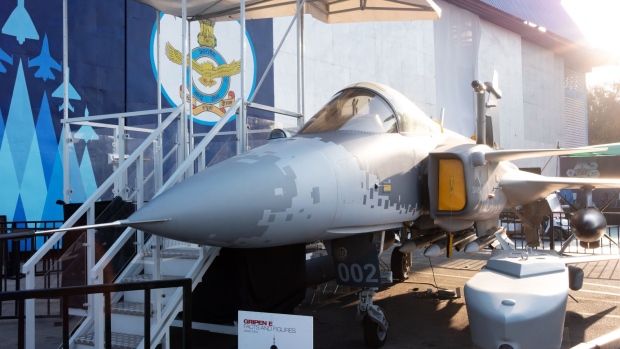 (Bloomberg) -- Saab AB wants control of local manufacturing in India if it beats the likes of Boeing Co. and Lockheed Martin Corp. in the race for the world’s biggest warplane contract.

The Swedish manufacturer is in the running to supply 114 Gripen fighters in a deal valued at more than $15 billion as Prime Minister Narendra Modi seeks to modernize armed forces reliant on mostly Soviet-era equipment in the face of threats from China and Pakistan. At the same time, Saab faces a requirement that at least 85% of the planes be built locally in partnership with Indian firms.

“If a company needs to take responsibility for quality, time, cost and capability that’s required by the Indian customer, I want to have some sort of control of that,” Saab Chief Executive Officer Micael Johansson said in an interview in New Delhi. It’s also important that Saab be able to export India-built Gripens to fulfill global demand, he said.

Saab has teamed up with Indian billionaire Gautam Adani on its bid, while Boeing has pitched its F/A-18 in partnership with state-run Hindustan Aeronautics Ltd. and MahindraDefence Systems Ltd. Lockheed has offered the F-21, specifically designed for the Indian bid and a close relation of the F-16, with conglomerate Tata Group, while the Eurofighter Typhoon and France’s Dassault Aviation SA Rafale are also in the mix.

“We just need to find a mechanism and the sort of balance between investing and having some sort of control, and not to be liable for things that we cannot control in the Indian market,” said Johansson, who was took over as CEO in October and was in India as part of a Swedish royal delegation.

India allows up to 49% of foreign direct investment in defense, though it could be possible to hold more with government approval and if the venture provides “access to modern technology.” The final details of the latest bid documents haven’t been published.

“Normally we would say if we have a majority in a company, we have some sort of a reasonable control,” Johansson said. “I don’t have a number between 51 and 100 today.”

Saab, which sealed a deal for 36 Gripen jets from Brazil in 2013, is in the running for 64 fighters from Finland, as well as a Canadian tender for 88 jets, where Eurofighter and Dassault have pulled out. It’s also looking at Croatia’s reopened pitch to replace outdated Mikoyan MiG-21s, and an order in Colombia. The company’s shares rose 1.4% Wednesday and are little changed this year.

Under the Indian tender, the winner needs to deliver the first jet within three years of securing the contract. The country scrapped a long-awaited order with Dassault for 126 Rafales worth $11 billion in 2015, but has since bought 36 of the planes to speed replacement of older aircraft.

Saab is looking at Indian partners in addition to Adani as it prepares to fight for the deal, Johansson said in the interview Tuesday. Tieups will be looked at on all levels, from the main company making the jets to suppliers, but Saab wants to control the entire system, he said.

To contact the editors responsible for this story: Young-Sam Cho at ycho2@bloomberg.net, Will Davies, Christopher Jasper