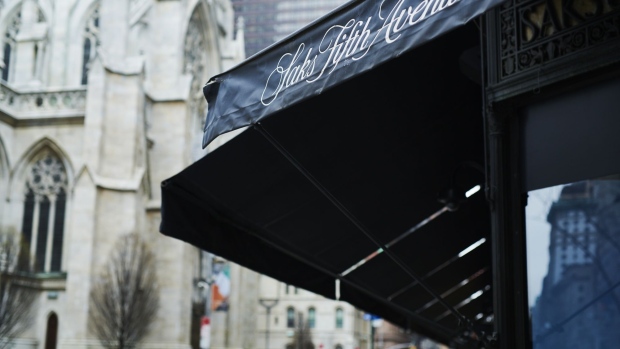 A Saks Inc. store is temporarily closed in the Midtown neighborhood of New York, U.S., on Friday, March 20, 2020. Some retail segments, such as grocery chains and Walmart, may benefit from the coronavirus outbreak. But for a sector already battered by the shift to online retailing and other structural changes, the coronavirus only portends more pain. Photographer: Gabby Jones/Bloomberg , Bloomberg

(Bloomberg) -- Saks Fifth Avenue’s e-commerce unit is interviewing potential underwriters this week for an initial public offering that could take place in the first half of 2022, Dow Jones reported, citing people familiar with the matter.

The luxury retailer is targeting a valuation of around $6 billion, triple its worth in March, it added.

After steps earlier this year to separate the online operations of Saks Fifth Avenue, the retailer’s owner also planned in June to split the e-commerce business of its discount chain into a standalone company, adding to the earlier move to break up the operations of a brand synonymous with luxury apparel.

The planned IPO would be the second step of the agreement this year after separating the e-commerce business, Dow Jones said.

The moves highlight the significant steps retailers are taking to adapt as the world emerges from a pandemic that has reshaped consumers’ buying habits, particularly in the apparel market. It also comes as the S&P 500 Index climbed 19% this year, set for its third annual advance.

In early 2020, Hudson’s Bay Co. shareholders agreed to take the owner of Saks Fifth Avenue private after an eight-month fight that pushed the company’s chairman to sweeten his offer twice.

The move to digital sales may be catching on with other traditional retailers. Earlier this month, activist investor Jana Partners said Macy’s Inc. could boost its valuation by spinning off its e-commerce business.

Jana said in an investor presentation that the retail chain could follow the lead of Saks Fifth Avenue. At a similar valuation, Macy’s online business could be worth about $14 billion, Jana said.