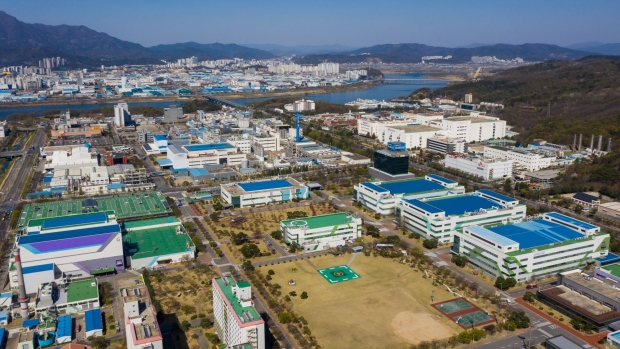 (Bloomberg) -- Samsung Electronics Co. runs its factories in Europe and the US entirely on clean energy. But in South Korea, the world’s largest smartphone maker is shackled by a domestic grid dependent on fossil fuels and a scarcity of renewable power.

Under pressure from climate-focused global investors, Samsung has emerged as a symbol of South Korea’s struggle to shift to green power. Now, with newly-inaugurated President Yoon Suk Yeol reviewing the country’s climate policies, environmental groups and some asset managers say it’s time for Samsung to set clear carbon targets and lobby the government to help it achieve them.

“If Samsung is truly determined to use clean energy, it has the power to pressure the government and make meaningful, tangible changes in the renewables market,” said Park Yoo-kyung, Hong Kong-based head of APAC Responsible Investment & Governance at APG. The Netherlands-based pension fund has been particularly vocal in adding pressure on Samsung and other South Korean conglomerates to take climate action.

A successful shift in South Korea and neighboring Japan is considered crucial in the global effort to combat climate change because both are home to some of the world’s biggest electronics makers, which are typically major energy consumers. The Asia Pacific region accounts for 60% of the global population and has the world’s fastest rising regional energy demand, according to the UN.

Some investors are particularly keen to see Samsung join a global initiative known as the RE100, in which members commit to eventually use 100% renewable energy. Some reports said it could join as early as last week, in time for Yoon’s inauguration, but the company said it wasn’t yet ready -- showing the difficulty of making green promises in a market still short on clean energy options.

Samsung is exploring how to achieve 100% clean power, including in regions “where securing renewable energy sources can be challenging,” it said.

Apple Inc. has already reached carbon neutrality for its global operations and plans to do the same with its supply chain by 2030. Apple supplier Taiwan Semiconductor Manufacturing Co. has joined the RE100 initiative, and investors say Samsung is at risk of losing business in the future if it doesn’t follow suit.

“For Samsung to not even make a commitment is extremely concerning because it will not only hurt its profitability in the long term, but also the economic growth of South Korea given its significance and influence,” said APG’s Park.

Even if Samsung does make such clean energy commitments in coming months, appeasing some investors, analysts see little chance of an immediate, meaningful shift.

Unlike in Europe, China and the US, where renewable energy prices have fallen thanks to competition and greater economies of scale, they remain costlier than fossil fuels in South Korea. That’s in part because of the nation’s lack of land availability for wind and solar, which means developers have had to use costlier technologies.

Analysts say an effective way to spur change would be for the government to offer more subsidies and tax breaks on long-term contracts for renewable energy, known as power purchase agreements, or PPAs. Those PPAs help secure investment in wind and solar projects, and shield heavy electricity users like Samsung from price volatility, allowing them to commit more easily to clean energy targets.

Jacqueline Tao, an analyst at climate research group TransitionZero, also recommended the removal of fossil fuel subsidies, which are still common in Asia.

All eyes are on the new administration of President Yoon, a strong proponent of nuclear energy but whose policies on renewables are still somewhat unclear. There are concerns that he appears less aggressive than his predecessor when it comes to setting climate targets, with the new administration calling for “realistic and responsible decarbonization plans.”

Some investors speculate Samsung may use the return of the conglomerate’s de-facto leader Lee Jae-yong, known as Jay Y. Lee and previously jailed for bribery and embezzlement, to announce key decisions on clean energy.

“There is still an opportunity for its leader Lee Jae-yong to demonstrate real climate leadership with a new 100% renewables commitment that has short-term solar, wind and battery storage-related targets, not just a vague long term goal that won’t calm shareholders,” said Kiran Aziz, head of responsible investment at KLP, Norway’s largest pension fund with $65 billion in assets under management.