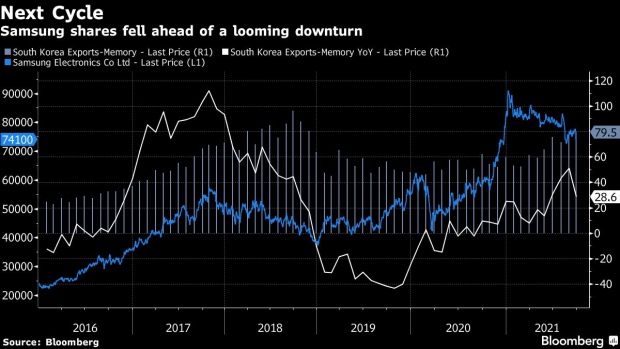 Net income rose to 12.06 trillion won ($10.3 billion) in the three months ended September, South Korea’s largest company said in a statement on Thursday. Analysts predicted 11.54 trillion won on average, according to estimates compiled by Bloomberg. Samsung disclosed preliminary numbers earlier this month, including a more than 25% increase in operating profit.

The world’s biggest maker of memory chips and smartphones has benefited from strong demand as the global economy recovers from the Covid-19 pandemic, with rising semiconductor prices providing an added boost. Still, memory-chip prices may start to cool this quarter as customers are less anxious to place new orders after stockpiling inventories.

“The growth in Korea’s DRAM chip exports may continue apace but prices may keep on weakening. The export value of DRAM in September rose 29% year-on-year to $3.78 billion, the highest since November 2018. However, spot prices often used in small transactions began sinking in August, and large contract prices may fall anytime soon.”

Smartphone shipments and average selling prices rose from the previous quarter, helped by the launch of new Z series foldable models. Galaxy Z Fold 3 and Flip 3 probably sold 2.8 million units in the third quarter and will sell about 3.6 million units in the current quarter, Meritz Securities said in a note.

Shares of Samsung have lost more than 10% this year, with industry observers predicting the memory-chip market to start cooling. Server clients have built up their inventories, putting pressure on memory suppliers to reduce prices. Rival SK Hynix Inc. said Tuesday the supply flexibility has changed from the past as chip suppliers manage capacity in line with demand, echoing Micron Technology Inc.’s argument that the wide swings between shortages and gluts are moderating.

Macro risks such as an energy crisis in China, soaring commodity prices and tepid U.S. job data could prompt customers to curb orders. “Considering the risk of economic slowdowns in China and the U.S. as well as falling memory prices, Samsung’s earnings may slow down until the first half of next year,” said Lee Seung-woo, an analyst at Eugene Investment & Securities.

While Samsung is better known for smartphones outside of South Korea, its profits are largely driven by its memory-chip business. Semiconductors typically account for the largest slice of its income.

The company is preparing for a major technology shift to so-called DDR5 memory chips that are faster than the previous generation while improving power efficiency. Samsung’s 14-nm DDR5 product is highly competitive and is set to be a boon for the company, said Kim Young-woo, an analyst at SK Securities. A prolonged delay in a new server processor that’d use the DDR5 -- an Intel Corp. product codenamed Sapphire Rapids -- could affect demand, Kim said.

Samsung is also betting on a more advanced chipmaking process as a growth driver. Its foundry revenue is set to expand at an annual average rate of 24% until 2026, with growth this year reaching 30%, Daishin Securities forecasts. Samsung plans to start producing 3 nanometer-based chips in the first half, while industry leader Taiwan Semiconductor Manufacturing Co. expects to start mass manufacturing in the latter half of 2022.