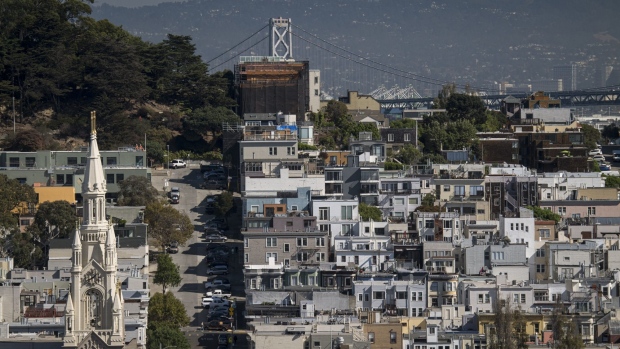 The Oakland-San Francisco Bay Bridge with residential houses and apartment buildings in the North Beach neighborhood of San Francisco, California, U.S., on Tuesday, Oct. 20, 2020. The median monthly rate for a studio in San Francisco tumbled 31% in September from a year earlier to $2,285, compared with a 0.5% decline nationally, according to data released Tuesday by Realtor.com. Photographer: David Paul Morris/Bloomberg , Bloomberg

(Bloomberg) -- San Francisco’s projected budget gap for the next two years will shrink to $528 million from $653 million as the technology hub collects more in property taxes this year than previously anticipated, according to a report by the city’s fiscal analysts Friday.

The city expects to collect $2.2 billion in property taxes, up from $2 billion it budgeted. At the same time, San Francisco is seeing declines in other key revenue sources. The analysts now estimate business taxes will come in $158 million less than budgeted and hotel taxes about $98 million less.

Salesforce.com Inc., San Francisco’s largest private employer, this week said it would permanently embrace more flexible work policies even after the pandemic ends, a move that could exacerbate the city’s fiscal strain. Credit rating companies S&P Global Ratings and Fitch Ratings this month cut their outlooks on San Francisco’s ratings to negative from stable, reflecting uncertainty about its recovery given changing work habits and pressure on commercial real estate and tourism.

The city’s forecast Friday that showed less of a hole for the next two fiscal years starting in July didn’t account for the prospect of additional federal stimulus or the impact of proposed legislation to ease the effects of the pandemic, such as rent relief. It warned that much remains unknown.

“Economically sensitive revenues are subject to historically high levels of uncertainty given the course of the pandemic and its economic effects,” the analysts wrote.