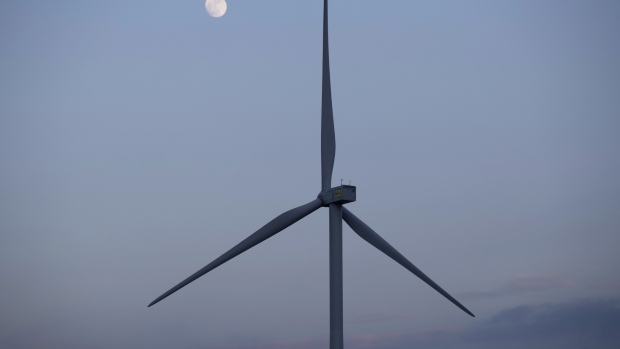 The moon is seen behind a wind turbine at the Subplu wind farm, operated by Gunkul Engineering Pcl., in Huay Bong, Thailand, on Thursday, Nov. 2, 2017. Gunkul, the most expensive energy stock in Thailand, plans to invest more than 20 billion baht ($599 million) in Japanese solar projects to boost earnings growth. , Bloomberg/Bloomberg

The Blue Hill Wind Energy Project will be located south of Herbert and is expected to have 56 turbines.

Saskatchewan has consistently opposed a federal carbon tax that would put a price on carbon emissions. The province argues it's already doing enough with its own climate change strategy.

“If all of this is about greenhouse gas emissions, we're trying to get to the same goal, we just have a different way to do it,” Duncan said.

Andrew Watson, an assistant professor at the University of Saskatchewan's school of environment and sustainability, said the project is a good start, although still puts Saskatchewan behind several provinces.

“I think the carbon tax has created the context within which the government is now eager and interested in developing wind power on this scale to demonstrate that there are alternatives to tackling climate change that don't involve a carbon tax,” he said.

The Canadian Wind Energy Association says Saskatchewan had 221 megawatts of installed wind energy capacity as of August. Ontario generates the most with 5,076 megawatts followed by Quebec at 3,882 and Alberta at 1,483.

The province said it has a strategy to reduce emissions from electrical power generation by 40 per cent by 2030.

The association says on its website that Saskatchewan unveiled a plan in 2015 to have wind energy make up 30 per cent of the province's electricity generating capacity by 2030.

In order to achieve that, the association says that Saskatchewan would need to add 1,600 MW of new wind energy in the next 15 years.

Watson said that goal is ambitious and would come down to how much the province would want to pay in order to make it happen.

“Do you start to shift some seeds away from fossil fuel companies, do you start to impose a carbon tax and shift those resources over into investment into renewable energy like this?” he said.

Saskatchewan currently has 143 wind turbines that make up around three per cent of the total generation fleet.

The new turbines are expected to generate enough energy to power more than 70,000 homes.

The project was first announced in 2012 but was held up due to various circumstances such as environmental assessments.

Construction is expected to begin next year with possible service as early as 2021.