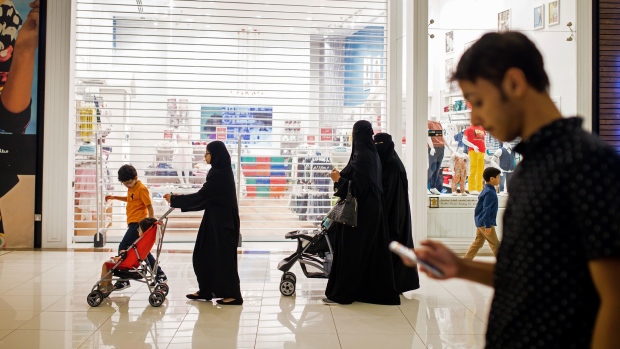 Women push strollers past a closed Adams Kids store at the Al Yasmin mall in Jeddah, Saudi Arabia, on Sunday, Aug. 6, 2017. After relying on oil to fuel its economy for more than half a century, Saudi Arabia is turning to its other abundant natural resource to take it beyond the oil age -- desert. Photographer: Tasneem Alsultan/Bloomberg , Bloomberg

(Bloomberg) -- Saudi Arabia’s Al Othaim family has called off its plans to sell shares of its malls business, in a rare instance of an initial public offering in the Middle East being scrapped as a market rally fades.

Abdullah Al Othaim Investment Co. decided to cancel the listing of a 30% stake on the Saudi stock exchange, according to a statement, without specifying the reason.

Bloomberg News reported in May that Al Othaim family had delayed the IPO of its mall unit just as it was due to start an investor roadshow for the offering, shortly before the family confirmed the report. The firm said at the time it was rescheduling the listing to select “the best suitable window.”

More family-owned companies have been listing in Saudi Arabia as officials try to deepen its capital markets and shake up traditional ways of doing business. Even though investor appetite for local listings in the kingdom remains strong, a rally in Middle Eastern equities faded over the past month as fears of recessions gripped global markets. Saudi Arabian stocks briefly erased this year’s gains in June and are down more than 16% from highs in May.

The Al Othaim family was considering seeking about $400 million to $500 million from the offering in Saudi Arabia, though hadn’t set precise terms of the deal, people familiar said in May.

GIB Capital LLC had been advising on the listing.