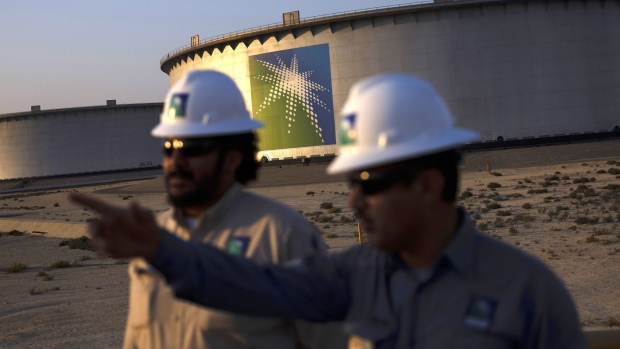 Crude oil storage tanks stand in the Juaymah tank farm at Saudi Aramco's Ras Tanura oil refinery and terminal at Ras Tanura, Saudi Arabia, on Monday, Oct. 1, 2018. Speculation is rising over whether Saudi Arabia will break with decades-old policy by using oil as a political weapon, as it vowed tohit backagainst any punitive measures after the disappearance of government criticJamal Khashoggi. Photographer: Simon Dawson/Bloomberg , Bloomberg

Saudi Aramco, the world’s largest oil producer, is weighing the sale of a stake in its pipeline unit to raise money amid a slump in crude prices, according to people familiar with the matter.

Aramco may need to raise cash this year as it confronts a historic rout in oil prices and a burgeoning list of spending obligations. The company has reaffirmed its commitment to pay out US$75 billion in dividends this year and also needs to make the first installment for its US$70 billion acquisition of a stake in chemicals producer Saudi Basic Industries Corp.

Aramco, the world’s most valuable publicly traded company after selling shares on the Riyadh exchange last year, could raise more than US$10 billion from the sale, the people said, asking not to be identified as the information is private. Aramco has already held some preliminary discussions with potential advisers on the deal, but talks are still at an early stage and Aramco may decide against a sale, the people said.

Aramco is ramping up oil supply at a time demand is falling off a cliff as travel restrictions are placed on people all around the world to stop the spread of coronavirus. The company has said it will keeping flooding the market with historic levels of oil at least through May, but the extra volume isn’t enough to compensate for the 67 per cent drop in prices this year.

The crash has already caused Aramco to slash planned spending. Capital expenditure would be between US$25 billion and US$30 billion in 2020 and spending plans for next year and beyond are being reviewed. The oil giant is lowering that range from the planned US$35 billion to US$40 billion announced in its IPO prospectus.

Neighboring Abu Dhabi has already raised US$4 billion from investors including KKR & Co. and BlackRock Inc. in a similar deal to the one Aramco is now considering.

Aramco Chairman Yasir Al-Rumayyan said last month that he was looking for ways to raise money from the company. “We have a lot of assets that could be monetized because they are non-core assets, which can improve the performance of the company,” he said in an interview with David Rubenstein, without giving further details.