Former foreign affairs minister Peter MacKay is urging the federal government to ensure the Canadian oil industry is top of mind in whatever it decides to do in its escalating diplomatic dispute with Saudi Arabia.

MacKay warned in an interview with BNN Bloomberg Tuesday that Canada’s deteriorating relations with Saudi Arabia could have a detrimental effect on the economy if it escalates further – especially considering the country’s reliance on Saudi oil.

“What’s alarming is this has escalated so quickly, and the [Saudi Crown Prince Mohammed bin Salman] has proven himself to be very aggressive,” MacKay said.

“It’s difficult to predict where this will go next, but definitely oil and its impact on Canada needs to be thought about in those diplomatic circles when it comes to what Canada’s next diplomatic move will be.”

Very alarmed to learn that Samar Badawi, Raif Badawi’s sister, has been imprisoned in Saudi Arabia. Canada stands together with the Badawi family in this difficult time, and we continue to strongly call for the release of both Raif and Samar Badawi.

MacKay added that the risk of Saudi Arabia’s government turning off the oil taps shows the challenge that Canada faces without diverse energy markets. Saudi Arabia was the second biggest exporter of crude oil to Canada in 2017 behind the U.S., making up about 15 per cent of imports, according to data from Statistics Canada.

“This is one of those anomalies that we have in Canada that while we are an oil-producing country, we are net importers of billions of dollars of Saudi oil along with Venezuela and other countries,” MacKay said. “And where we still haven’t been able to get oil to tidewater, that could disproportionately affect oil prices here in Canada.” 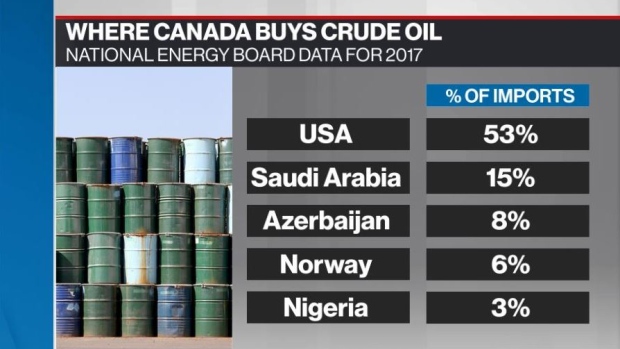 Meanwhile, MacKay said Ontario could feel the biggest economic impact from the diplomatic battle. In a deal brokered by the Canadian government, General Dynamics Land Systems in London, Ont. has a multi-billion-dollar contract to supply weaponized armoured vehicles to Saudi Arabia, and a cancellation could affect more than 2,000 jobs, MacKay said.

The diplomatic dispute between Saudi Arabia and Canada has snowballed into the economy. Saudi Arabian Airlines suspended flights to Toronto and put trade with the country on hold. BNN Bloomberg’s Jameson Berkow discusses how much Canada’s energy sector has at stake.

“You’re talking about a contract that’s the largest in Canadian military history. If this was to be cancelled by either the Saudis or the Canadians …I suspect particularly southern Ontario would feel the brunt of this diplomatic dust-up,” MacKay said. “That coupled with trade tariffs from the United States and the threat of tariffs towards [the automobile industry] could have a very, very detrimental effect on the Canadian economy if this were to unfold further.”

The Kingdom has also ordered thousands of Saudi students studying in Canada to leave the country and attend schools elsewhere, which will also disproportionately impact Ontario, MacKay said.

“There are real economic impacts that will bite if this dispute is not somewhat ameliorated,” he said. “And I suspect what will have to happen is the prime minister will have to make a direct intervention.”