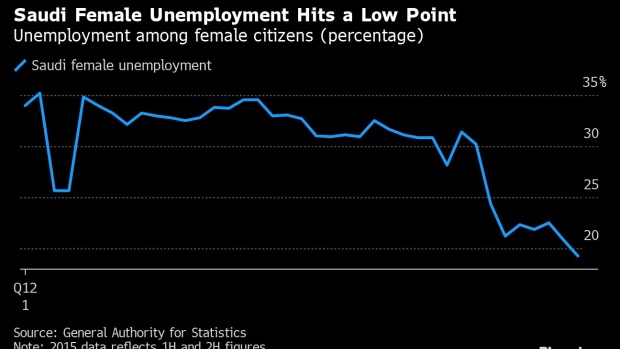 Unemployment among Saudi women fell to the lowest level on record during the second quarter even as they face more competition as the labor force expands.

Joblessness among Saudi females was at 19.3%, the lowest level since Bloomberg first started tracking quarterly data in 2012. Overall unemployment among citizens fell to 9.7% during the second quarter, also a new low, according to data published Thursday by the kingdom’s General Authority for Statistics.

Increasing the participation of women in the kingdom’s labor force is a priority for Prince Mohammed bin Salman’s ‘Vision 2030’ economic transformation plan. Job creation in the kingdom has been one of the biggest challenges facing the de facto leader, as he reshapes an economy dependent on exporting oil and importing foreign labor while also dealing with the impacts of the pandemic. Prince Mohammed has taken several steps to boost women’s role in the economy, curtailing the power of the religious police, ending the ban on women driving, and easing rules that kept women beholden to male guardians.

Citizen unemployment peaked at over 15% at the height of the Covid-19 pandemic in 2020, but has fallen almost every quarter since. Female unemployment rose to over 30% during that period.

Participation among female citizens rose 1.9 percentage points to 35.6% during the second quarter, while the employment-to-population ratio reached 28.7%, according to the kingdom’s statistics office.