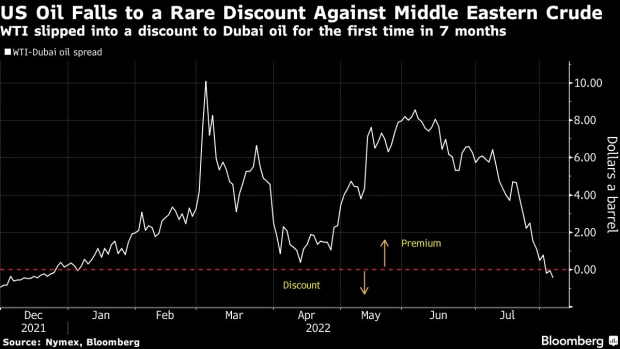 Saudi Arabia’s decision to price some of its oil at lower-than-expected levels is setting the stage for keen competition in Asia among producers vying to supply the region.

The kingdom set the September price for flagship Arab Light crude at about $1 a barrel below the figure forecast in a Bloomberg survey. The price of a lighter variety known as Arab Extra Light was raised by just 30 cents, a move that surprised traders who anticipated larger month-on-month adjustments.

While the price of Arab Light still managed to set a record, traders said state-owned Aramco likely opted for modest increases to stay competitive against arbitrage flows into Asia. That’s after London’s Brent and West Texas Intermediate grades weakened against Middle Eastern benchmarks, which are referenced in Saudi’s pricing.

Factors such as the ramp-up of Libyan oil supplies, dramatic reduction in Brent’s backwardation, and an uncharacteristic dip in US gasoline demand during what’s supposed to be peak-driving season were also seen as supportive of more oil flows from the Atlantic Basin to Asia, traders said.

Asian refiners have started to snap up light-sweet crude from the US for November delivery. The WTI Midland grade was shown at a premium of around $8 a barrel over benchmark Dubai prices to North Asian buyers this week, said traders, down from $15 to $16 a month ago. Indian refiners were also buying some Libyan crude, they added.

Lighter crude varieties tend to yield more distillates such as gasoline when refined. Asian refining margins for the vehicular fuel have dipped over 80% since late June, dragging down overall profits from turning crude into fuels.