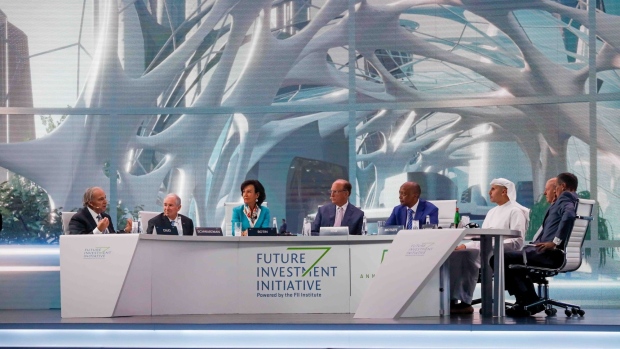 Abdulaziz bin Salman, Saudi Arabia's energy minister, pauses during a panel session on day two of the St. Petersburg International Economic Forum (SPIEF) in St. Petersburg, Russia, on Thursday, June 3, 2021. President Vladimir Putin will host Russia’s flagship investor showcase as he seeks to demonstrate its stuttering economy is back to business as usual despite continuing risks from Covid-19 and new waves of western sanctions. , Bloomberg

“What we want to initiate as Saudi Arabia is somewhat more egalitarian,” he said in a discussion at the fifth edition of the Future Investment Initiative in Riyadh. Developing nations must not be forced to pay the same as rich ones for emitting carbon, he said.

The minister’s comments come ahead of major climate talks in Glasgow, known as the COP26 summit. While Saudi Arabia on Saturday pledged to neutralize greenhouse gas emissions within its borders by 2060, many analysts expect it to try to water down far-reaching proposals from the likes of the U.S. and European Union.

On the first day of Crown Prince Mohammed bin Salman’s signature business event, some of the world’s top executives said they were concerned that rising energy prices were driving a spike in inflation that could threaten the global economic recovery.

All items below are Saudi local time:

Standard Chartered Plc Chief Executive Officer Bill Winters has warned that while developed countries have a clear pathway to funding the transition to a low-carbon economy, for much of the world it remains a distant prospect. There is a “huge gap” to close, said Winters, who pointed out that advanced economies can see 60% to 70% of the funds needed, compared to less than 10% in Sub-Saharan Africa. “There is a big, big, disconnect,” he said. “Connecting the finance to the underlying technology is our key goal.”