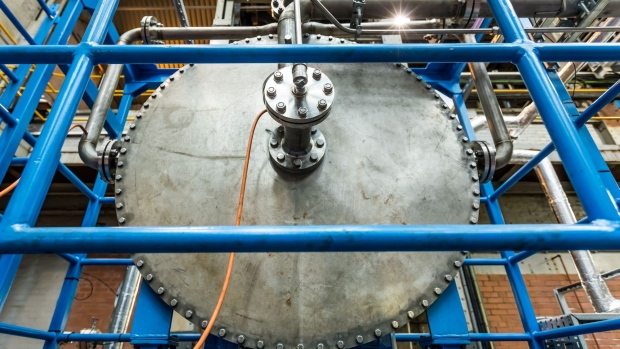 (Bloomberg) -- A London-based startup is shrinking the size of carbon capture plants as it tries to popularize a green technology that’s been slow to expand beyond limited applications.

Carbon Clean Solutions Ltd. is building small, replicable reactors that can remove carbon dioxide from industry and power generators. Carbon capture could be a key way for companies to eliminate their emissions quickly as governments issue net-zero mandates before the COP26 climate summit in Glasgow, Scotland.

Techniques have been around for years, but the low price of pollution dimmed their appeal. In Europe, it costs about 60 euros ($70) to release a metric ton of carbon dioxide into the atmosphere for industries covered by the bloc’s emissions market. That’s the opportunity for Carbon Clean, which says it can capture a ton of carbon emissions for as little as $40 now.

The secret sauce is a design that shrinks the carbon capture mechanism to about one-tenth the size of conventional designs, even down to 1 cubic meter (35 cubic feet). Smaller size means less material used to build the plant and smaller area taken up in the pollution-spewing factory — which helps make the process cheaper overall. The CycloneCC model announced Oct. 28 could be mass-manufactured for cement production, oil refining or steelmaking.

“The only way you can scale up carbon capture between now and 2030 is if it’s modular and mass produced,” said Aniruddha Sharma, Carbon Clean’s co-founder & chief executive officer. “Bespoke installation will never get where you want to be.”

The world may need to capture as much as 7 billion tons of carbon dioxide each year by 2050, under the International Energy Agency's net-zero modeling. All carbon capture plants in the world today capture about 40 million tons a year, according to the Global CCS Institute.

Carbon capture technologies typically use a chemical in the reactor to trap carbon dioxide from a mixture of gases—like using a magnet to attract iron fillings. Carbon Clean developed a proprietary solvent it says can push costs even lower.

Investors in the company, founded in 2009, include oil giants Equinor ASA and Chevron Corp., and Mexican cement maker Cemex SAB de CV. The startup has raised $45 million and is seeking another $100 million.

Carbon Clean has more than 40 machines operating around the world, and they’ve captured 1.4 million tons of CO2, Sharma said. The company can manufacture a maximum of 15 units annually, but that’s not nearly enough to match the demand it expects in coming years.

“It would be a major development if they can reduce the size in the way they claim,” said Samuel Krevor, who researches CO2 sequestration at Imperial College London. “You would expect to see the kinds of cost reductions they're claiming.”

Carbon Clean’s also working on a business plan that would have it operate as a service provider, where it would install the technology and charge to capture emissions, either on a per-ton basis or for a fixed monthly price. Taking away the risk of high upfront cost for the equipment could go a long way in reassuring those who want to use the method to cut emissions. The company declined to say how much it would charge for the reactor or services.

If all goes to plan, a final product will be released by mid-2022, and Carbon Clean will start taking orders in 2023. That schedule could line up well with efforts in Norway, the Netherlands and the U.K. to build up networks for transporting captured emissions and storing the gases under the North Sea.