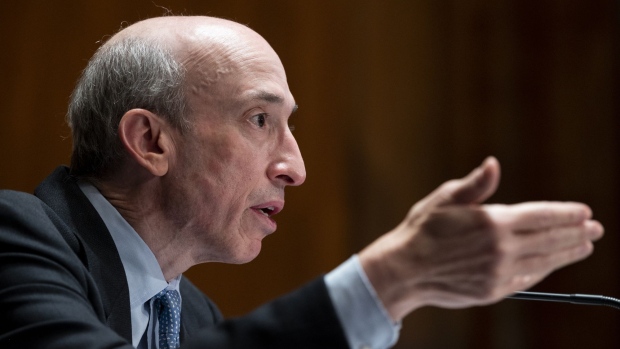 (Bloomberg) -- Securities and Exchange Commission Chair Gary Gensler zeroed in on his concerns about exchange-traded funds that directly hold Bitcoin, the latest snub to hopes that the long-desired product would gain clearance by U.S. regulators.

In response to questions from Pat Toomey, the top Republican on the Senate Banking Committee, Gensler reiterated his concerns about the lack of regulatory oversight of Bitcoin and potential for fraud and manipulation. He said that even though non-U.S. regulators have approved a spot ETF, the SEC’s decision wouldn’t be influenced by that.

“The markets for actual Bitcoin itself today are largely unregulated,” Gensler said in comments sent to Congress last week, according to a spokesperson for Toomey. “This lack of regulatory oversight and surveillance leads to concerns about the potential for fraud and manipulation.”

Last month, the SEC rejected a proposal by VanEck to operate a Bitcoin ETF on Cboe Global Markets Inc. Gensler has said that while he’s comfortable with futures-based ETFs because Bitcoin futures trade on highly regulated exchanges, that’s not the case with physical Bitcoin. The SEC earlier this year said it would allow futures ETFs.

Toomey noted that regulatory agencies in Canada and Europe have approved spot exchange-traded products, and that American investors are finding ways to access them.

“As fellow regulators, our staff seeks to learn from the experiences of others,” Gensler said in his response to Toomey. “Actions in the other jurisdictions are not binding on U.S. regulators, and our staff continues to follow applicable legal standards and processes under the federal securities laws.”