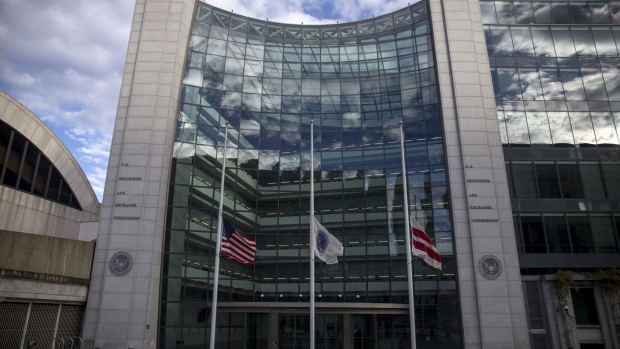 The headquarters building of the U.S. Securities and Exchange Commission (SEC) stands in Washington, D.C., U.S., on Dec. 22, 2018. Parts of the U.S. government shut down on Saturday for the third time this year after a bipartisan spending deal collapsed over President Donald Trump's demands for more money to build a wall along the U.S.-Mexico border. , Bloomberg

(Bloomberg) -- The company behind the digital coin Hydro and a crypto market-making firm tried to artificially inflate the token’s price after it was offered through a so-called airdrop, according to the Securities and Exchange Commission.

The SEC said on Wednesday that The Hydrogen Technology Corp., its former chief executive officer, Michael Ross Kane, and Tyler Ostern, the CEO of Moonwalkers Trading Ltd., broke its rules by selling tokens the agency identified as securities into a market artificially inflated using bots. The regulator said that the Hydro tokens were initially distributed to investors through a variety of means, including airdrops and as employee compensation.

Hydrogen hired Moonwalkers to “to create the false appearance of robust market activity for Hydro” and made more than $2 million in profits due to the effort, the regulator alleged. “Companies cannot avoid the federal securities laws by structuring the unregistered offers and sales of their securities as bounties, compensation, or other such methods,” said Carolyn M. Welshhans, associate director of the regulator’s enforcement division.

In a statement, Hydrogen said the SEC’s case “wholly lacks merit” and vowed to litigate the matter. Kane didn’t immediately respond to a request for comment and attempts to locate contact information for Ostern were unsuccessful.

Without admitting or denying the SEC’s allegations, Ostern, the Moonwalkers CEO, agreed to pay back around $40,000 in ill-gotten gains and a fine to be determined later by the court, the SEC said. In a filing in federal court in Manhattan, the SEC also sought a series of penalties against Hydrogen and Kane.

Wall Street’s main regulator has long asserted that many virtual tokens are securities and under its jurisdiction, but crypto firms and promoters have sought ways to distribute coins outside of traditional financial offerings. Airdrops, where tokens are given out to users and developers for continued participation in a project for free, have become an increasingly popular method.

The alleged misconduct involving Hydro, which occurred from January 2018 to April 2019, could raise the stakes for the practice, which has become a mainstay in decentralized finance and crypto gaming.

To determine whether something is a security, the SEC applies a legal test, which comes from a 1946 Supreme Court decision. Under that framework, an asset can be under SEC purview when it involves investors kicking in money with the intention of profiting from the efforts of the organization’s leadership.

Eric Rosen, a partner at Roche Freedman, said that the SEC’s case signals that the regulator may consider a token offered through an airdrop to be a security. “An airdrop, even though technically free,” could violate securities because the purpose is to benefit the distributor, he said.