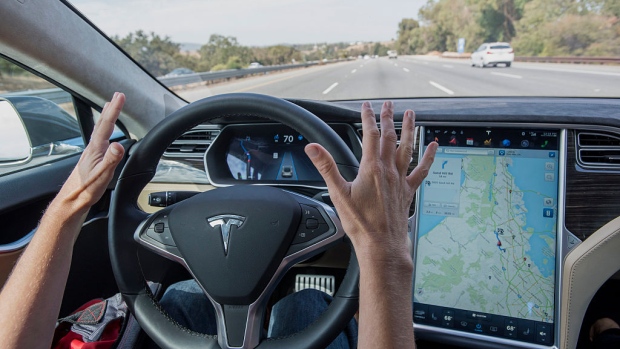 Dan Peate, a venture capitalist and entrepreneur in Southern California, was thinking of buying a Tesla Model X a few years ago — until he called his insurance company and found out how much his premiums would rise.

For all the concern over accidents involving driverless cars, including Tesla’s troubles with its limited self-driving “Autopilot” mode, it’s easy to forget one of the supposed virtues of autonomous vehicles: they will make the roads safer. A sophisticated array of lidar, radar and cameras is expected to be more adept at detecting trouble than our mortal eyes and ears. And computers never get drunk, check Tinder or fall asleep at the wheel.

Peate, 40, previously started a company called Hixme, a provider of group health insurance. Now, he wanted to launch a new firm specializing in insurance for vehicles with automated-driving modes (and eventually fully-autonomous cars). His experience with the insurer of his old-fashioned, non-driverless car only confirmed the need.

When underwriters and actuaries price insurance on a new type of risk, Peate said, they charge more because they don’t have enough data. With so few Model X’s on the road, its safety record was, at best, opaque. But Tesla and other carmakers collect reams of data on their vehicles’ operation in order to improve automation. Peate said he realized “we can get large amounts of data across entire fleets and be able to underwrite without having to wait for years of data” from accidents after they’ve happened.

It also enables an insurer to cut premiums for drivers the more they engage autonomous driving.

On Jan. 30, Peate announced the creation of Avinew, with US$5 million in seed funding led by Los Angeles’ Crosscut Ventures. Its insurance product will monitor drivers’ use of autonomous features on cars made by companies including Tesla, Nissan, Ford and Cadillac, determining discounts based on how  the feature is used. Avinew has agreements with most manufacturers, and is working to tie up the rest, Peate said, allowing it to access driving data once a customer gives it permission.

Deloitte, in its 2019 insurance outlook report, saw this coming. “The rise of connectivity…has generated a massive amount of real-time data and turned the insurer’s relationship with policyholders from static and transactional to dynamic and interactive.” Avinew said it expects to be writing policies later this year in select states.

The transition points to a larger, existential crisis for the multbillion dollar car insurance industry. If nobody’s driving, why do we need auto insurance? Premiums—and company revenues—are based on a driver’s likelihood of being in an accident and actual crash rates. With more than 90 per cent of accidents caused by human error, taking the driver out of the equation is going to mean big changes for insurers.

“This comes up in every strategic conversation,” said Michelle Krause, senior managing director in Accenture’s insurance client service group. The major carriers “are very focused on understanding the technology behind [automation] and what opportunities are available for them.”

Krause’s group, with research from the Stevens Institute of Technology in New Jersey, published a report in 2017 forecasting trouble for insurers as automation becomes more widespread. Premiums could drop by 12.5 per cent of the total market by 2035, the authors found, and while new insurance product lines centered on autonomous vehicles will offset some of the loss, declining premium revenues will eventually outpace gains.

The good news for the industry is that it has time. Stevens estimates that by 2035 there will be only 23 million autonomous vehicles on American roads — less than 10 per cent of today’s total. And as of now the technology required for autonomous features is extremely expensive to repair, meaning premiums will initially rise as more cars featuring them roll off dealers’ lots.

“When you think of all these sensors and calibration, a little fender-bender could be a much more costly proposition,” said David Ross Keith, an assistant professor of system dynamics at the Massachusetts Institute of Technology.

“It’s foreseeable that insurance is a much less consumer-facing industry in the future.”

As automation reaches Levels 4 and 5 — fully autonomous capability with the option for a human driver to take over, and fully autonomous with no human involvement, respectively — insurance is going to change dramatically.

“It’s foreseeable that insurance is a much less consumer-facing industry in the future,” Keith said.

That’s because the driver won’t be the risky part. “Liability is likely to migrate from the individual to the manufacturer and the licensers of the software that drives the AV,” said Rodney Parker, an associate professor of operations management at Indiana University. Accenture’s report agreed. That means insurers will be selling more policies to companies and fewer to drivers: carmakers and suppliers of communications systems, software, and sensors are going to be on the hook for the failure of their products, rather than drivers paying for not checking their blind spot.

More broadly, the nature of risk itself is going to change, said Hyejin Youn, a professor at Northwestern University. With human drivers, “uncertainty is randomness, and random chances follow a normal distribution.” If the risk is in faulty software or sensors, it becomes “more systematic.”

Nationwide is one insurance company that’s started thinking about this problem. Drivers today are rated based on factors including sex, age and driving history. “If we’re getting data from the vehicle, that rating changes dramatically and gets very complex,” said Teresa Scharn, associate vice president of product development. Insurers are already in the data management business, of course, but “it’s getting to be an even bigger muscle that we have to flex.” Like Nationwide, Allstate is aggressively hiring experts in big data and analytics, according to its president of service businesses, Don Civgin.

Determining who’s at fault when something goes wrong could get thorny in this new world.

If the lidar goes on the blink, is that the carmaker’s fault or the supplier of the lidar? What if the driver failed to get the latest firmware update—so now it’s his fault? If a Cadillac with Super Cruise loses its internet connection, is that on GM or Verizon? What if the car gets hacked and is redirected to a thief’s lot? What if municipal infrastructure managing traffic flow loses its data? “As a society we’ll have to figure out who’s liable for these different things and that will determine who’s required to insure against what risks,” MIT’s Keith said. Youn of Northwestern sees it as a “public policy problem, best addressed in government.”

Yet these are all opportunities for the legacy insurance companies quickest to adapt—as well as startups like Avinew. Policies that protect products will become more widespread, while mobility as a service, Keith said, will mean we’ll want to “insure our safety as a passenger” as well. Without a driver, there’s no driver to insure.

Nationwide thinks the smoothest road ahead will be one on which insurers and automakers each have a hand on the wheel. “We’re working to build deeper relationships with car manufacturers,” Scharn said.

Perhaps that means mergers on the horizon between insurers and automakers? Krause of Accenture said “those conversations are going on as we speak.”