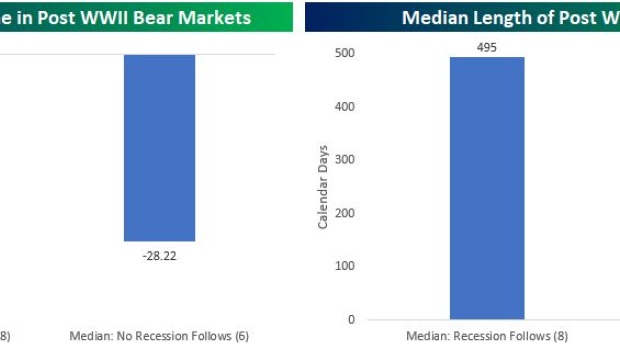 Traders work on the floor of the New York Stock Exchange (NYSE) in New York, US, on Tuesday, May 31, 2022. The S&P 500 defied bear market status just over a week ago and is set to finish May roughly where it started. Photographer: Michael Nagle/Bloomberg , Bloomberg

(Bloomberg) -- With stocks, bonds and crypto plummeting, inflation out of control and months of Federal Reserve tightening to come, it’s starting to feel like everything that can go wrong in financial markets is. Panic is in the air. For traders looking for a silver lining, that’s about the best that can be said.

The S&P 500 has fallen nearly 9% in three days, a bruising stretch that has left virtually nothing unscathed, including energy shares, the year’s best-performing group. Selling in bonds has accelerated, with the yield on 10-year Treasuries touching the highest since 2011, and two-year rates at the highest since the financial crisis. The cost to protect investment-grade debt from default soared and an ETF tracking that sector plunged to the lowest since March 2020.

Can it get worse? Yes. History is replete with examples of premature bullishness. Bottoms prove false, data get uglier, and things that seemed cheap turn out to be expensive a day later. For people who consider the exhaustion of sellers to be a useful bellwether, it can at least be said that the process is underway. How long it still has to go is unknowable -- though there are indicators that have helped in the past.

“It’s always difficult,” Nancy Tengler, CEO and chief investment officer of Laffer Tengler Investments, said of distinguishing between the start of a market selloff and the end of one. “Usually you look for panic selling, among another things,” she said. “The question is how much more pain is there and how much longer is it going to take?”

Fanning the flames of the downturn is the consensus that sky-high inflation will require a more aggressive response from the Fed to be brought under control, in turn dragging down US economic growth. Money markets now see the central bank’s terminal rate at 4% for the first time, and are pricing for it to get there by the middle of next year. Certain pockets of the market see the Fed going to great extremes this week, with some banks not ruling out a potential 100 basis-point hike.

At 3,750, the S&P 500 now trades at just over 15 times its estimated profits for 2023, toward the low end of its valuation range over the last decade. In better times, that might breed confidence that an end was in reach to the selling. With emotions ruling markets right now, it’s precious little to base a bull case on.

Strategists and chartists say they are looking for heavy volume, a spike in the Cboe’s volatility gauge, gappy moves in equities and surrender on behalf of the retail-investing cohort.

Stocks will have a tough time rebounding without the VIX hitting 40, a level Evercore ISI strategist Julian Emanuel says will mark a “cathartic flush-out.” The volatility gauge rose above 34 Monday.

Trading volumes on US exchanges topped 15 billion shares Monday, 3 billion more than the average so far this year.

Dave Lutz at JonesTrading, meanwhile, keeps a “capitulation list.” He’s starting to see more panic, and is watching for whether the VIX hits 38, a level it reached in February. The ratio of puts to calls on the S&P 500 has approached its highs for the year, another sign that a potential wash out of bearishness is near. On the other hand, a measure of relative strength on the index sits at 32, above the level that would indicate an oversold condition.

Monday’s session also marked a “big drawdown” day with extreme breadth, Lutz said. All but five stocks in the benchmark index fell. Retail investors, meanwhile, are “starting to take enough wounds. They are definitely getting scared,” he said.

The selling at the start of the week was relentless. Energy, the year’s best-performing sector, lost more than 5%, its worst session in more than a month. All the nervousness about the Fed’s moves has revived recessionary warnings from economists who see the Fed raising rates at a pace that won’t allow the economy to elude a downturn. Morgan Stanley’s chief executive officer said he sees the risk of a US recession at about 50%.

“It’s going to be a recession,” said Victoria Greene, chief investment officer at G Squared Private Wealth. “It’s funny we still have recession deniers. I don’t see how it doesn’t drag into a recession just because of the drastic steps the Fed is going to have to take.”

This year’s bear market reached its designation quicker than average. The S&P 500 typically takes 244 days to fall 20% from its peak, according to Bespoke Investment Group. The current one took just 161 days. And in more than half of the 14 bear markets since World War II, the index reached a low within two months of crossing the 20% threshold.

Monday’s break below 3,850 for the S&P 500 could be just the beginning of even more precipitous selling that could take the index to 3,200, or more than 30% below January’s highs, according to Lori Calvasina, head of US equity strategy at RBC Capital Markets. That would be “in line with the average recession drawdown in the S&P 500 peak to trough since the 1930s,” she wrote in a report. Calvasina also notes that such a decline would be analogous to the Covid selloff in early 2020, “making us think this is a reasonable starting point for thinking about how low the S&P 500 could go this time in a recession drawdown.”

Elsewhere, though, Saira Malik, CIO at Nuveen, sees opportunities in growth stocks. The cohort suffered losses through May that were five times larger than those seen by its value peers. Price-to-earnings multiples for growth and tech look potentially more “inviting,” and though inflation moderation remains elusive, a plateau may soon be in sight. “Tough times for growth stocks continue, but we see glimmers amid the gloom,” she wrote.

Still, while it might be true that traders want to see the VIX higher than where it currently is before they can holler capitulation, it’s hard to come up with a clear definition on what a wash-out event truly looks like, according to Art Hogan, chief market strategist at National Securities.

“The capitulation point, we’re likely closer to today than we were a month ago,” said Hogan in an interview. “But, unfortunately in the real world, you can’t put strict guidelines around what panic and capitulation selling looks like.”