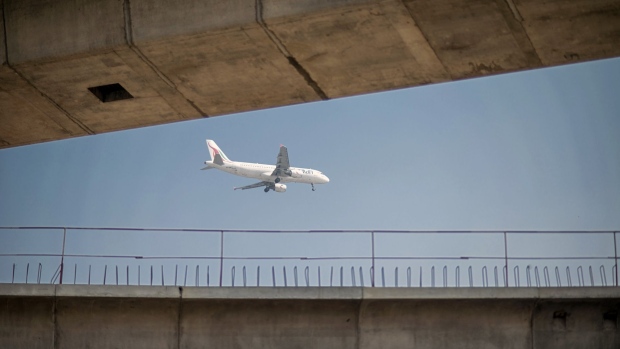 SriLankan Airlines Ltd., which prior to the pandemic flew to 126 destinations in more than 60 countries, lost 45 billion rupees ($125 million) in the year through March 2021, Wickremesinghe said Monday, less than a week into his job. Sri Lanka had bought back a stake in the carrier from Dubai’s Emirates in 2010, betting on a resurgent travel industry after the end of its 26-year civil war, but the airline has been marred in controversy, including corruption scandals.

“I don’t expect much interest from airlines,” said Brendan Sobie, Singapore-based founder of consultancy Sobie Aviation. “Many of the airlines that made overseas investments in prior years have shifted their strategies and are no longer eager to acquire airlines in other markets. SriLankan also isn’t that attractive given its history and the challenges it still faces.”

The attempt to sell the airline comes with Sri Lanka on the verge of defaulting on two unpaid foreign bonds. High inflation has led to widespread public anger and violence, prompting the former prime minister to resign.

Wickremesinghe said Monday he had to print money to pay government salaries, which will pressure the local currency. “The next couple of months will be the most difficult ones of our lives,” he said.

SriLankan’s predicament carries risks for aircraft-leasing firms, including Air Lease Corp. and Avolon Holdings Ltd., analysts at Bloomberg Intelligence wrote in a report last month. While the size of the Sri Lankan aviation market isn’t close to Russia’s, where lessors face writedowns of billions of dollars, the crisis could exacerbate their problems, analysts including Adrian Sim wrote.

Sri Lanka has previously failed to find a buyer for the debt-laden airline. In 2018, the country revived a process of privatizing the carrier after talks with TPG Capital collapsed following due diligence of the airline. But two years later, that plan was taken off the table.

At least eight parties had showed interest in a 2016 attempt to sell the flag carrier, including U.S. buyout firm Blackstone Group LP, Bloomberg News reported at the time. Sri Lanka’s allure in part is down to its proximity to India, from where travelers are increasingly taking stops in Colombo to either visit the island or the neighboring Maldives and Seychelles.

India’s largest conglomerate Tata Group, which recently bought formerly state-run Air India Ltd., and European carriers such as Deutsche Lufthansa AG, Air France-KLM or Turkish Airlines could be interested in buying SriLankan, according to Mark Martin, founder of Dubai-based Martin Consulting LLC. A successful bid could help them establish a second hub in Asia, enabling them to take on Gulf carriers that dominate the continent’s south and southeast, he said.

Sri Lanka is also home to many European expatriates, creating demand for the Visiting Friends and Relatives travel segment, which holds significant potential, Martin said. “Will SriLankan find a buyer? Absolutely it will. It had a foreign airline investor before, and it again will.”

However, the crisis in Sri Lanka has plunged the flag carrier further into crisis, sending its dollar bond to a record low and indicating a distressed level, according to data compiled by Bloomberg. It has also slashed jobs and salaries, and renegotiated aircraft leases after grounding about 95% of its fleet during the worst of the pandemic. The carrier has about two dozen Airbus SE jets.

“Sri Lanka is in a very bad shape, so anyone thinking of buying its flag carrier is therefore taking a huge risk,” said Shukor Yusof, founder of aviation consulting firm Endau Analytics in Malaysia. It would be “better to let the airline go down and let market forces dictate the future of air connectivity for Sri Lanka.”

The airline brings “more problems than advantages given its legacy issues,” Yusof said. Some potential buyers, like Singapore Airlines Ltd., would struggle to justify shelling out for it after receiving government bailouts, while a cash-rich carrier like Qatar Airways is helmed by a chief executive who is “not easily swayed, no matter how cheap the valuation,” he said. IndiGo, India’s biggest airline, may not “bite off more than it can chew” given its own issues.