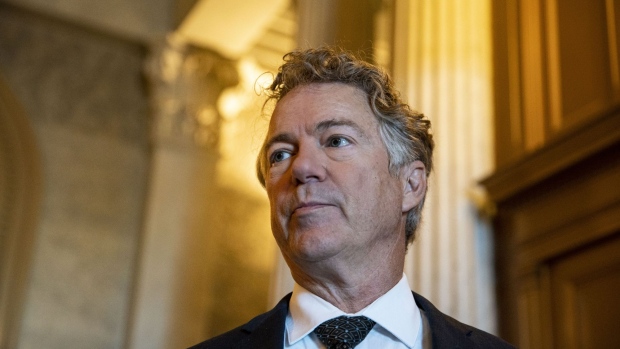 The U.S. Capitol in Washington, D.C., U.S., on Thursday, March 10, 2022. The House passed a long-delayed $1.5 trillion spending bill that would fund the U.S. government through the rest of the fiscal year and provide $13.6 billion to respond to Russia's invasion of Ukraine. , Bloomberg

(Bloomberg) -- The Senate overwhelmingly voted to move toward passage of $40 billion in aid to Ukraine, underscoring the broad Republican and Democratic support for the country as it defends itself against Russia’s invasion.

Monday’s 81-11 procedural vote sets up Senate passage of the legislation as soon as Wednesday if all lawmakers consent to waive rules on debate. That would send it to President Joe Biden for his signature if no changes are made.

The package of military and humanitarian assistance has been held up by Senator Rand Paul, a Kentucky Republican. Last Thursday, Senate Majority Leader Chuck Schumer and GOP leader Mitch McConnell, also of Kentucky, made a rare joint offer to allow an amendment vote on language Paul sought. But he wanted the provision, which would have likely failed on the floor, written into the legislation itself.

“His obstruction will not prevent Ukraine aid from ultimately passing the Senate,” Schumer said on the Senate floor Monday. “One way or another we are going to get this done and send a clear message to Ukraine and the world that America stands on the side of democracy and against Putin’s deeply immoral campaign of violence.”

Paul told reporters that the final vote would probably occur on Thursday.

While Democrats have overwhelmingly backed aid to Ukraine, Paul is among a group of Republicans who have begun pushing back against further assistance because of deficit concerns. When the aid package passed the House last week, 57 GOP lawmakers opposed it. Paul argued the US can’t afford the spending.

“There have always been isolationist voices in the Republican Party,” McConnell said Sunday after a trip to Ukraine.  “I think one of the lessons we learned in World War II is not standing up to aggression early is a huge mistake.”

Public support for Ukraine aid remains steady and strong. A Monmouth University poll out Monday found that 77% of Americans support sending weapons to Ukraine, with 88% of Democrats, 77% of Republicans and 70% of independents in favor. The May 5 to May 9 telephone poll of 807 adults had an error margin of 3.5 percentage points.

Pentagon spokesperson John Kirby earlier this month said that funding for the draw-down authority Biden has used to send weapons to Ukraine would run out by the third week of May if no additional money was provided.

The bill includes $19.7 billion for the Defense Department, more than $3 billion above the level asked for by the Biden administration. This includes the $6 billion in direct security assistance to Ukraine that Biden sought last month and $9.05 billion to replenish weapons stocks sent from the Pentagon to Ukraine.

The package would provide $4 billion in foreign military financing for Ukraine and other countries affected by the invasion to help them purchase weapons. It also includes $8.8 billion in direct economic support for Ukraine along with funds to repair the US Embassy in Kyiv, document war crimes and protect against nuclear fuel leaks.

In addition, the measure would provide $4.35 billion for global food and humanitarian aid to be administered by the US Agency for International Development and another $700 million in global food funding at the State Department. The inclusion of the funds was made despite some concerns from Republicans that the global food crisis should not be addressed.