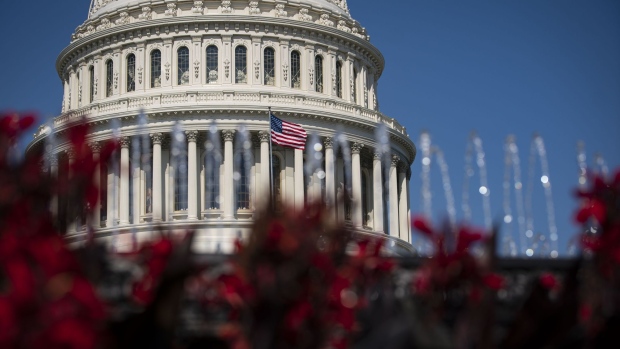 The U.S. Capitol in Washington, D.C., U.S., on Thursday, Aug. 5, 2021. Two senators are bargaining with the White House on a bipartisan proposal to give states flexibility to use some unspent pandemic relief funds on infrastructure projects, which would free up billions of federal dollars. Photographer: Al Drago/Bloomberg , Bloomberg

(Bloomberg) -- Democrats and Republicans in the Senate are heading for a standoff over the federal government’s debt limit that risks throwing financial markets into chaos if both sides refuse to budge.

Republicans have signaled all summer that they are unlikely to support a debt limit suspension or increase, a move they say would be tantamount to endorsing the trillions in social spending that Democrats are planning on their own later this year. But some moderate Democrats are wary of the political hazard of voting to allow the federal debt to grow if it isn’t part of a bipartisan package to fund the government.

Senate Democrats currently have two options. They could convince at least 10 Republicans to vote for the debt ceiling in a stop-gap funding measure that must pass by the end of September to avert a government shutdown. Or they could opt to go-it-alone by including it in a budget resolution that only requires 50 votes and will serve as the framework to pass President Joe Biden’s economic agenda.

Senate Minority Leader Mitch McConnell on Thursday issued his strongest warning so far, stating bluntly on the Senate floor that Senate Republicans won’t offer support for a debt limit increase in light of Democrats’ partisan drive to push through $3.5 trillion in new spending for climate change, health care and other priorities.

“If they don’t need or want our input, they won’t get our help with the debt limit increase that these reckless plans will require,” McConnell said. “I could not be more clear.”

It’s not yet known how quickly Congress needs to act to avoid a potential default, which would wreak havoc on financial markets and could trigger a downgrade of government credit. The debt limit, or the total debt the Treasury can issue to the public and other government agencies, snapped back into effect on Aug. 1 when a two-year suspension expired. Treasury Secretary Janet Yellen has told lawmakers that Treasury could exhaust its special measures and run out of cash “soon after Congress returns from recess” in September.

The Congressional Budget Office projects that lawmakers likely have a wider window of time -- until October or November -- to raise or suspend the debt limit. The public debt outstanding is currently $28.4 trillion.

Relying on Republicans to join Democrats could be courting chaos, with most GOP senators adamant that they won’t support extending the debt limit in a short-term spending bill, known as a continuing resolution. Agencies will run out of spending authority when the fiscal year ends on Sept. 30, and absent so-far elusive consensus on appropriations bills the government would shut down without the must-pass stop-gap measure.

“I don’t think the Republicans would vote for the CR with that in it,” Missouri Senator Roy Blunt, a member of the Senate Republican leadership team, said. “I don’t see that kind of negotiation being fruitful at a time when Democrats are talking about spending $5 trillion or $6 trillion outside of the normal budget spending.”

Blunt said he’s not worried about a stand-off, but Democrats have control of Congress and the White House and they need to raise the debt ceiling themselves. Senator Mitt Romney, a Utah Republican, said it would be “a big risk” and irresponsible for Democrats not to raise the debt limit on their own in Democrats-only bill.

“I think the majority has to solve this,” Blunt said. “They control the House and the Senate and the White House and it’s easy for them to deal with if they want to.”

Democrats are more confident that they can convince Republicans to vote for a debt ceiling increase, a hike that will be needed regardless of whether or not Biden’s economic agenda is approved this fall.

“That decision hasn’t been made, how it’s going to happen,” Senator Patty Murray, a Washington Democrat, said. “We’ve supported it in the past, Democrats, I expect Republicans to support it, it’s what you’re supposed to do when you are running a country and we are all in this.”

Democrats could opt to include an instruction to raise the debt ceiling in a fiscal blueprint they aim to pass early next week that could allow the $3.5 trillion economic package to pass later this year with only Democratic votes along with any new limit on the nation’s borrowing.

No. 2 Senate Democrat Dick Durbin said it was possible the Democrats could act on their own, but “I don’t think a decision has been made.”

Montana Senator Jon Tester, a moderate Democrat, said he would prefer to keep the debt ceiling provision out of the Democrats-only reconciliation bill.

“If the Republicans want to crash this economy and hand the keys to this over to China, then that’d be pretty irresponsible, so I think they need to play in the game too,” he said.

A default on payment obligations “would cause irreparable harm to the U.S. economy and the livelihoods of all Americans,” Yellen told lawmakers in a letter last month. “Even the threat of failing to meet those obligations has caused detrimental impacts in the past, including the sole credit rating downgrade in the history of the nation in 2011,” the letter said.