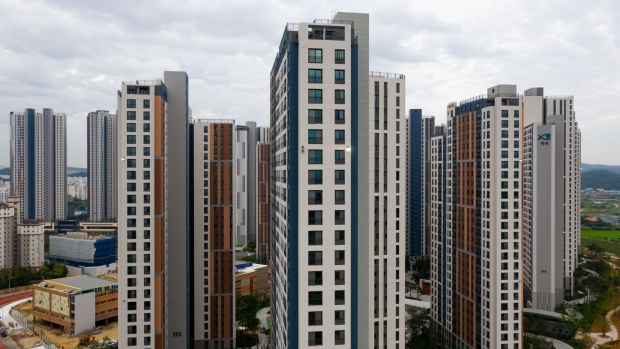 (Bloomberg) -- Seoul has emerged as Asia’s top market for office and retail property deals after the South Korean capital averted a lockdown by controlling the Covid-19 pandemic.

“While headline investment figures may appear muted, there are signs of a recovery underway,” the Real Capital team led by Simon Mallinson wrote in the report. “The pipeline of deals at this point is larger than last year’s tally, while economies have also been reopened steadily.”

Dealmaking across the Asia-Pacific region fell 38% in the third quarter from a year earlier, a smaller decline than Europe’s 43% and the 57% drop in the U.S., where the the virus continues to rampage. South Korea led Asia with $6.8 billion in third-quarter deals, a 22% year-over-year gain.

The Asia data indicate persistent demand for office and shopping centers, defying predictions that Covid-19 will promote irreversible shifts favoring remote working and e-commerce. Asia was first in and first out of the pandemic. The outbreak in South Korea peaked in early March. The country, with a population of more than 50 million, has confirmed 26,925 Covid-19 cases and 474 deaths, according to Johns Hopkins University of Medicine’s Coronavirus Resource Center.

Other global real estate trackers also report comparative strength in Asia where steps such as mask wearing and contact tracing brought Covid-19 under control, even in congested urban centers. CBRE Group Inc. reported third-quarter transactions fell 25.6% from a year earlier in Asia, 33.4% in Europe and 59.5% in the Americas on a currency-adjusted basis.

Dealmaking varied dramatically, depending on how hard a country was hit by the virus. Lockdowns in Sydney and Melbourne led to a 61% decline in Australia’s third-quarter transactions. In Taiwan, deal volume jumped 168% from a year earlier. In South Korea, a $9.3 billion pipeline of deals built up in September, greater than the total volume of transactions in the fourth quarter of 2019.

Sales remain hampered by virus-induced travel restrictions that limit the ability of international investors to look over properties or negotiate face-to-face.

“Markets such as Japan, China and South Korea, which have large domestic investment bases to fall back on during times of challenged cross-border investment, have had an advantage in the Covid era,” the Real Capital report said.

Pricing has held firm in most markets.

“Sellers have generally been unwilling to match the double-digit discounts that buyers have been pushing for,” the report said. “Even in Sydney, Melbourne and Singapore, where lockdowns have hit the hardest, price softening has been confined to vacant or older assets, with prime assets being traded at prices above pre-pandemic levels.”