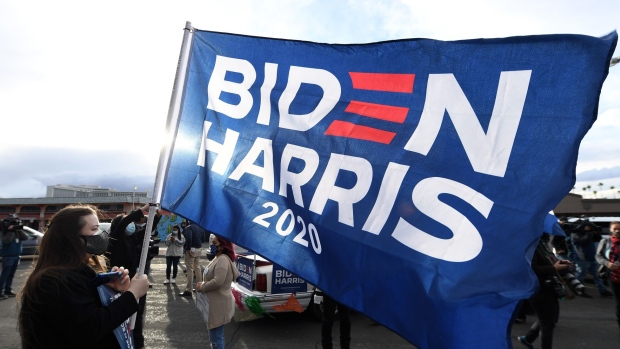 (Bloomberg) -- A new poll conducted since President Donald Trump left office shows a 9-point gap between the number of Americans who identify as Democrats or lean Democratic, compared to those aligned with the Republican Party, the largest gap in almost a decade.

Gallup said the jump comes mostly from Republicans leaving the party at the end of President Donald Trump’s tenure. Only 25% of U.S. adults firmly identify with the Republicans, down from 29% late last year.

Some 30% of respondents said they consider themselves to be Democrats. Gallup said it was not unprecedented for Democratic Party affiliation to rise after a Democratic candidate wins the presidential election, and cited similar increases after the elections of Presidents Bill Clinton in 1992 and and Barack Obama in 2008.

There has also been a spike in Americans identifying as independents, no matter which way they lean, since the election of President Joe Biden. some 44% of respondents made that choice. The number is up from 38% at the end of 2020.

The poll was conducted among nearly 4,000 adults and has a margin of error of 2 percentage points.